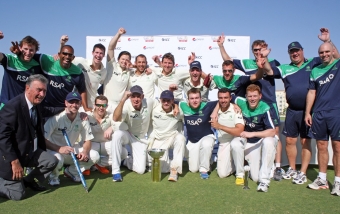 Cricket Ireland President gives us the inside story on a historic day for Irish cricket as John Mooney led Ireland to a superb win over Afghanistan in the Intercontinental Cup Final and help crown Trent Johnston’s career in the best possible way.

The beauty of the two-bedroom apartment atop the Oasis Beach complex overlooking central Dubai is that the lounge can comfortably accommodate an Ireland cricket squad and its backroom staff.

Exactly three hours after William Porterfield and his side had made history by collecting their third Associates’ global trophy of the year, team manager and room mate Roy Torrens and I opened the doors for one of the best celebrations I’ve been party to.  And with good reason: the side had toiled in the heat for almost four days to defeat Afghanistan and end a year that will go down as the most successful since the Gentlemen of Ireland played their first game back in 1792. It was fitting that Trent Johnston was invited to accept the trophy on behalf of the team to mark the end of the final match of his remarkable 10 year career in an Ireland sweater; a fine gesture after an Achilles’ problem had forced him to miss most of the Afghan second innings.

He was also the centre of attention at the party and it was fitting too that Andrew White spoke on behalf of the squad.  He had played more games with Trent than anyone else, hardly surprising for a player who had just equalled Kyle McCallan’s record of 226 caps.  John Mooney then presented Trent with a rather fine and suitably inscribed watch bought by the players.

Andrew’s speech was masterful,  tracing the chronology of a career whose contribution to the wellbeing of Irish cricket, he said, had surpassed anything that had gone before and is ever likely to happen again.

Trent’s reply was typically generous, even asking me to pass on his appreciation of the friendships he has enjoyed with former presidents over the past 10 years.  His main thank-you was reserved for his team mates down the years and at the end he made no attempt to hide his emotion. I was to say to Max Sorensen later that I had found that rather touching, only to be informed that he too had shed a tear.

My few words were all of congratulations: to Phil Simmons on the two-year renewal of his coaching contract; to Kevin O’Brien who had just picked up the ICC Associates’ Player of the Year award; to John Mooney who takes home the Man of the Match award for his 10 wickets; and, of course, to all players and backroom staff for quite an exceptional year. Almost shed a tear myself as I wished them all a
well deserved happy Christmas.

But it was not all emotional.  Far from it as amusing reminiscences flowed, interspersed with sing songs starring the strength and conditioning coach Brendan Connor and the aforementioned Max Sorensen. These fit young men can party into the wee small hours as taxis arrived to prove it. Alas, long gone are the days……

I’m told Jumeirah Beach is a couple of hundred yards away but because of early morning starts and early evening darkness I’ve yet to enjoy its delights. Will be put to rights henceforth.

Before that I must parcel up some Cricket Ireland mementos for a new found friend, Nick Robinson, his wife Darina who hails from Dun Laoghaire and two young cricket-mad sons. Nick is an Australian-born barrister whose enthusiasm for Irish cricket was such that he travelled daily from Dubai to Abu Dhabi during the recent Twenty20 World Qualifier. He is also a seriously helpful man, his long trip to the nearest off licence 40 miles away, mandatory liquor licence in pocket, making last night’s celebration fuel possible.

Tonight it’s off to the airport and home in time for Sunday lunch. On Monday it’s back to Dublin to introduce a welcome home news conference at Cricket Ireland headquarters. Let’s hope for a decent turn out - it’s the least this wonderful squad deserves.

Ed’s Note: The Irish Squad land at Terminal 2 in Dublin Airport at 6.50am tomorrow morning and there will be a press conference at the Cricket Ireland offices in Clonshaugh at 11.30am on Monday the 16th of December.