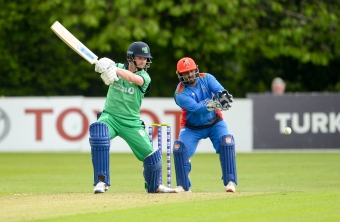 Sunday’s dominant 72-run win over Afghanistan has put a pep in the step of many Irish cricket fans, but Ireland Men’s cricket team remain focussed on the task at hand as they seek a 2-0 victory in the GS Holdings ODI Challenge at Stormont in Belfast tomorrow.

With Afghanistan undertaking their final preparations for the ICC World Cup 2019, they were not looking for a sub-par performance less than two weeks out from their first Cup Stage match against Australia in Bristol. The weather and conditions of Stormont venue has been likened to those the Afghans will face in Bristol, so Graham Ford’s side should feel even more buoyed by their performance against a side that was peaking for a World Cup.

Combined with the announcement that Head Coach Phil Simmons will be stepping down from his role with Afghanistan after the World Cup, the visitors will want to get their campaign preparations back on track and will be in no mood to go down without a fight in the Series decider.

For their part, Ireland can be justifiably pleased with the resilience of their performance, and the players ability to bounce back from an admittedly disappointing Tri-Series in Dublin. The 72-run win was unexpected to most people watching the match after the home side was dismissed for 210, however, an inspired and miserly bowling performance by Tim Murtagh and Andy McBrine not only drew Ireland back into the contest but laid a solid platform for what ended up a comfortable victory.

It seems to ODIs are format that these two sides have shown they are most competitive in, and this competitiveness is set to be on full display in this second encounter.

As shown in the first match of the Series, if Ireland’s bowlers can maintain a disciplined line and length, backed up by sharp fielding, the home side can frustrate the visiting batters who will then seek to take risks in the pursuit of runs. Murtagh and McBrine not only kept the Afghan top-order quiet, they built up a level of pressure that later bowlers capitalised on. Murtagh’s 2-12 from 6 overs and McBrine’s incredible 0-17 from 10 overs included six maiden overs between them. The pressure on the batters came through their attempts to hit out against Mark Adair (4-19) and Boyd Rankin (3-40), who ran through the middle and lower order, after nowadays part-time seamer Kevin O’Brien broke the only real threatening partnership of the Afghan innings. Ireland’s attack, so effective against England, but inconsistent during the Tri-Series, will look to deliver again at the famous Belfast ground.

For the Afghanistan side, so much is pinned on getting off to positive starts by their top three batters - knowing that they have reliable stalwarts like Asghar Afghan and Mohammad Nabi to come in after to stabilise or resurrect an innings. If the Irish bowlers are a bit off in the second match, watch for the likes of Hazratullah Zazai and Mohammad Shahzad to take the long handle to the attack.

Conditions
As ever, the Stormont surface will offer a slower, more seam-friendly deck than its Dublin-based counterparts. The day is expected to be cool with cloudy conditions, without expectation rain that will cause a loss of overs.