PREVIEW: Ireland at the Under-19s World Cup - All you need to know 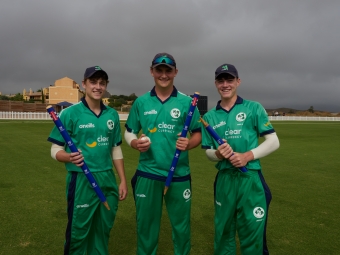 GUYANA - The Ireland Under-19s Men’s cricket team is in Guyana ahead of their participation in the ICC Under-19s Men’s Cricket World Cup, starting 14 January 2022. Ireland is making its 9th appearance at the tournament after qualifying with a convincing win over Scotland in the European Qualifier. Here is what you need to know.

Ireland’s qualification demonstrated a remarkable turn-around in the space of a few days by a determined group of players keen to reach the main stage. The Irish team fell to a 33-run defeat to Netherlands on the opening day of the Qualifier and - in the shortened format of the tournament - looked destined to head home early on first showing. The loss meant that there was no longer a route to qualify unless they went unbeaten in the next three games, and may still need results to go their way elsewhere.

A stabilising 40-run win over Jersey three days later augured well, but their long-time nemesis the Scots were next. With great relief Ireland blew Scotland away by 95 runs, skittling their opponents for just 44.

Elsewhere, the Dutch side fell to Jersey, leaving Ireland and Scotland to square-off in the Final that would decide which European side progressed to the main tournament.

Remarkably, in an almost carbon copy of the prior match, Ireland heavily defeated Scotland by 78 runs, bowling out the Scots for 66.

While there were many stand-out performances, of note was Instonians’ Jack Dickson’s 103* against Jersey, and Lisburn’s Matthew Humphreys who returned back-to-back bowling figures of 4-11 and 5-25 in the run in to qualification.

Tenth place in 2010 is Ireland’s best performance at this tournament, but they won three of their six matches last time they qualified in 2018, including a memorable 4-run win over Afghanistan. The side that day featured Harry Tector, Josh Little, and Neil Rock - all current internationals involved in the senior series against West Indies this week.

Here is what you need to know about the upcoming tournament.

Ireland are off to the Under-19 @cricketworldcup

Despite a defeat on day one to the Netherlands, Tim Tector’s team recovered to reach the final of the European Qualifier, before defeating Scotland to book their tickets pic.twitter.com/uHNo9N4Kda

The tournament will be held between 14 January and 5 February 2022, with 16 teams competing for the title that is considered the pinnacle for youth cricketers across the world. The competition features four groups of four teams, with the top two from each group progressing to the Super League stage of the tournament to decide the tournament winner. Teams finishing in third and fourth place in each group enter a Plate play-off.

The Groups and Standings will be found here:https://www.icc-cricket.com/u19-world-cup/standings


The experience at the Qualifier tournament demonstrated this side has resilience, mental toughness, and the determination to win - attributes they will need in abundance in a group that features India and South Africa. This was called out recently by Head Coach Pete Johnston who said:

“We have largely kept faith in the squad that won the final in the European Qualifier, as the players showed great resilience in bouncing back from defeat in the first game. The way the lads finished strongly in that tournament, defeating an experienced Scotland side twice, was a great demonstration that they know their roles and their strengths - and most importantly, they know how to go about winning games under pressure.”

The squad is led by Tim Tector, the third brother to captain the Ireland Under-19s side after older brothers Jack and Harry.

The clash against India will not be the first time the two sides have met at this level - the last encounter was in 2015-16 when India won the 79 runs in a match that gained a lot of plaudits for the Irish performance. A look at the teams that day revealed names on the field such as Rishabh Pant, Washington Sundar for India, and an Irish side full of future internationals such as Harry Tector, Josh Little, William McClintock, and Lorcan Tucker - the latter two players hitting half-centuries.

As a platform to tackle the world’s leading emerging stars, the Under-19s World Cup is unrivalled as can be demonstrated by the match between Ireland and Pakistan in 2018 where a young speedster called Shaheen Afridi tore through the Irish batting line-up.

Prior to the World Cup tournament, Ireland Under-19s played a four-match warm-up series against Zimbabwe. While it was a 3-1 series defeat, the win in Game 4 by 117 runs showed the side were beginning to acclimatise well to the Caribbean conditions.

You can watch select tournament matches on www.icc.tv and a number of matches will be carried live on Sky Sports in UK/Ireland.

You can follow livescoring of the tournament (inc warm-up match) here: Visit our Match Centre or alternately via www.icc-cricket.com