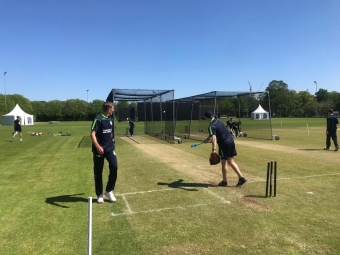 Training in the nets in Utrecht

UTRECHT, Netherlands – After the disappointment of yesterday’s dramatic one-run loss to the Netherlands, Ireland Men’s captain Andrew Balbirnie had the squad back in the nets today to refine their tactics and approach for the second match in the series tomorrow.

The Irish side will be keen to atone for the loss, particularly as they had multiple phases of the match in which they were in seeming control, and felt the match was definitely one that got away.

“It was slightly disappointing that they got to 195, considering we had them at 53-5 - but at the halfway mark we were confident of being able to chase that down. We knew it would be a tricky wicket, but we just didn’t apply ourselves as we should have. Paul [Stirling] played another brilliant knock, but we just couldn’t get anyone to support him.”

“We’ve gone away and discussed our approach to batting on such a tricky wicket, probably the thing we most talked about was how to rotate strike a bit better, and avoiding clusters. We talked a lot about the need to put in some big partnerships.”

About his side’s fitness and availability ahead of the second game:

“Everyone is fit and ready to go. George Dockrell was a concern after an incident in yesterday’s game, but his wrist is fine and he is all good. We are all looking forward to getting back out there tomorrow.”

The conditions expected tomorrow will see temperatures in the mid-20s, with periods of cloud cover and chance of a passing shower or two.

With the new World Cup Super League underway, each game is worth 10 points – with pundits suggesting the likely threshold to qualify for the 2023 Cricket World Cup will be around 100 points from the 24 matches to be played by each side. As a consequence, every game becomes vital and both sides are keen to maximise their points from this series.

The series is being played in Utrecht, and are part of the ICC World Cup Super League:

A new ‘Competition Centre’ has been launched to provide series details and series statistics (see here).

The matches will be available to watch via livestream in Ireland and UK at: https://youtube.com/user/CricketNederland

Whilst the core squad includes 15 players, an additional four players have also travelled to assist with preparations and training given the current COVID-19 restrictions not permitting local support.

The core squad is:

The four additional players are: