PREVIEW: Ireland look to begin bumper home summer with a bang as England come to town 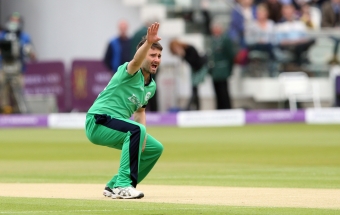 It had been assumed that Ireland’s main chance to nab a surprise win over England would come later this summer, at Lord’s in the historic Test match the sides will contest. The hosts will have one eye on the Ashes and the other examining their World Cup campaign in the rearview mirror, and may perhaps lose sight of the present. “We’re hopeful of catching England a little bit cold,” Tim Murtagh says.

This ODI had seemed like more of a long shot, with England firmly ensconced as the best one-day side in the world, planning to come over with a near full-strength squad fine-tuning for their biggest summer in a generation. And yet, events over the last weeks and months should give those predicting a walkover cause to reconsider.

England’s preparations have hit a couple of minor speed bumps, with injuries and indiscretions leaving them without Jason Roy, Sam Billings, and Alex Hales, all world-renowned ball-strikers, while Jos Buttler, Jonny Bairstow, Moeen Ali, and Mark Wood have all been rested.

Ben Foakes, Dawid Malan and Ben Duckett, with three ODI caps between them, have received call-ups. Add in Jofra Archer, outrageously talented but also untried at international level, and more than a third of England’s XI might not have played an ODI since the start of 2017, and more than a quarter not at all.

Anglo-Irish matches have always been hard-fought, with Ireland rating no scalp more highly, but apart from the famous 2011 encounter they have had to settle for near-misses. Four times they have lost by less than 50 runs – two of those by three and 11 runs – while in 2013 England were 48-4 in pursuit of 270 before recovering. How Ireland would love another statement win, leading into a bumper home summer involving a tri-series with Bangladesh and West Indies and a white-ball visit from Zimbabwe.

They come into the game in good form, having drawn an ODI series 2-2 in India against Afghanistan. They will also be able to once again call upon experienced wicketkeeper-batsman Gary Wilson, recalled after recovering from a condition which affected his vision, and one game away from 100 in ODIs, while seam-bowling all-rounder Josh Little and batsman Lorcan Tucker could make their ODI debuts. It is already set to be a special occasion. But a win for Ireland would make it all the sweeter. Image: The last time the two sides met in ODIs was at Lord’s in 2017

England’s regular opening pair of Jonny Bairstow and Jason Roy might just be the most destructive ODI cricket has ever seen, and certainly England’s most consistent. They have been good enough to keep a player as accomplished as Alex Hales – who might well make it into every other team in the world – sidelined.

But none of those three will be present in Malahide, with England instead opting with James Vince and one of Ben Duckett and Dawid Malan to do battle in the Powerplay. They will most likely come up against Tim Murtagh, who has rarely bowled better. “Fitness-wise I feel better than I did five years ago,” he says. “I feel like I’m bowling as well as ever too.”

He has 18 first-class wickets at 10.72 for Middlesex so far this season, while in the One-Day Cup he’s been even better, maintaining an economy rate of 3.64, remarkable in these bat-dominated times.

From the other end will likely be Boyd Rankin, who finished one wicket off the top of Ireland’s ODI wicket-takers charts on a seamers’ graveyard in Dehradun against Afghanistan, all while conceding well under five an over. Back in helpful conditions, on a green-ish wicket against a green-ish batting line-up, they could carve out the in-roads that pave the way for a seismic victory.

As ever, The Village in Malahide should favour the seamers. There may be some showers around, but not so much as to cause an abandonment.

If you live outside Ireland, you can now order your copy online: https://t.co/xXwWSeqTPS#BackingGreen  pic.twitter.com/7D6px9Kg94