PREVIEW: Ireland looking to finish series on a high 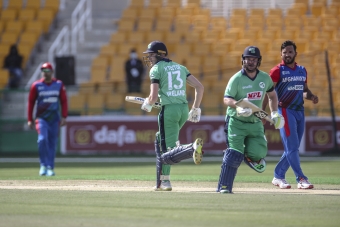 Despite losing the series, 10 points are still up for grabs in the World Cup Super League

ABU DHABI - Ireland Men’s team will be looking to avoid a series whitewash tomorrow when they take on Afghanistan tomorrow in the final game of the three-match series - however, with world cup qualification points still up for grabs, this is anything but a dead rubber.

The men in green were outclassed on Sunday despite a century from opening batsman Paul Stirling. 103 from Rahmat Shah along with Hashmatullah Shahidi’s 82 proved too much as the Afghans ran out victorious by seven wickets and took an unassailable 2-0 lead in the series.

Andrew Balbirnie and his men may not be able to win the series, but there are still 10 ICC Cricket World Cup Super League points on the line – which could prove crucial on the road to India 2023.

Speaking after the game on Sunday, Balbirnie hinted that there may be changes to the XI ahead of tomorrow’s final match.

“There are definitely players ready to go in the wings, and that’s the beauty of this squad that there are a number of players knocking on the door.”

“We picked the guys for these two games that we thought could win some games, and they have been trying – particularly the bowlers who have been battling hard on a wicket not conducive to our style of bowling.”

“The lads are hard on themselves, they’ll be really disappointed with the last two games, but as a squad we’ve got to be ready to rebound and ready to go – we’ve only a day between games, and we’ve got to pick ourselves up and get some points towards this World Cup Super League.”

Despite the defeat on Sunday, Balbirnie believes that Paul Stirling can produce the goods once again in the final match of the series.

“Paul seems to have a fantastic tour every time we go away – he was very close to the late Roy Torrens who we unfortunately lost yesterday, and you could see that that innings today was for him.”

Balbirnie is fully aware that others need to contribute more with the bat if the team are to defeat a strong Afghanistan side tomorrow.

“I still think we can do better with the bat – apart from Paul and Curtis, there weren’t a lot of positives to take. We played well the other day getting 270, and we set ourselves up to mount a good total here today, but we weren’t able to do that, and against this Afghan side that has a lot of power we were up against it.”

“At the halfway stage we were in the game, but would have liked a few more having batted so well – particularly Paul again playing so beautifully to set us up. We probably lost a bit of momentum there at the back end. With 260 we felt in the game, but we didn’t have enough on a pitch that played a bit slower and deader as the day went on.”

The final match of the series gets underway tomorrow at 6am Irish time and all the details of how you can watch it can be found here.