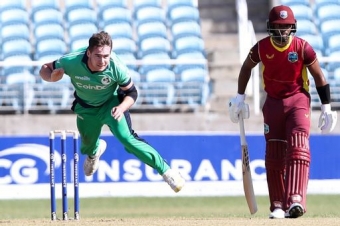 KINGSTON, Jamaica - Ireland and West Indies will resume their ODI series battle tomorrow with the Men in Green feeling they let the first match slip through their fingers after being in seeming control during the run chase.

With Irish captain Andrew Balbirnie missing from the next match as a result of a COVID infection, vice-captain Paul Stirling will take the reins for the first time in ODI cricket. Stirling previously captained Ireland Men in six T20Is in early 2019, but this will be his first time leading in the longer format. When asked about his captaincy, Stirling said:

“I think you have to put your own spin on it. If you try to be someone else in life at anything, you usually come off second-best. You’ve got to do what your gut feeling tells you to do. It’s going to be fun, it’ll be interesting - it definitely won’t be perfect, but I’m looking forward to the challenge.”

Asked about tactics, Stirling indicated the toss will play a key role in deciding the team’s tactical approach. With the early start of 9.30am, conditions that a batting or bowling side will face in the morning will vary dramatically to those faced at 3.30pm. He said that he watched the entirety of the first ODI and could see a blueprint for how his side may take into the match whether batting or bowling first.

Adding to the challenge, weather reports around Kingston suggest a chance of afternoon storms, after tops of 29 degrees - meaning heat and humidity will be a factor.

After the COVID-related challenges of the last week, Stirling was asked about whether the squad was in the mindset to: “win the series” or just “finish the series and get home”. He said that once the uncertainty of the last few days was sorted out, the player’s minds are definitely focussed on winning games of cricket. It had been a challenging time for some within the squad, but now the next two ODIs have been sorted it made it easier for the players.

Both sides trained at Sabina Park today ahead of tomorrow’s match. While the West Indies have a full-strength squad to pick from, Ireland will be without Balbirnie, Lorcan Tucker, Simi Singh and Ben White. Andy McBrine and Mark Adair look likely to be available.

* unavailable for next match

You can follow livescoring of the series (inc warm-up match) here: Visit our Match Centre

Other related notes and stories