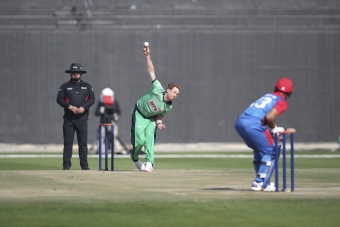 Afghanistan are 1-0 up in the three-match series

ABU DHABI - Ireland’s men will be looking to bounce back during tomorrow’s second ODI against Afghanistan after suffering a 16-run defeat in the series opener on Thursday.

A century from debutant Rahmanullah Gurbaz and a rapid fifty from Rashid Khan ensured that the men in green would be chasing a formidable total (scorecard).

Captain Andrew Balbirnie believes that his side has what it takes to rebuild and clinch victory in the last two matches – claiming vital ICC Cricket World Cup Super League points with qualification for India 2023 very much at the front of their minds.

“Whenever you get 270 in really spin-friendly conditions against a spin attack like theirs, there can be a lot to be happy about but we lost the game (on Thursday) and that’s the important thing. We know the areas we could have done better [in], but it’s exciting to see this group learn and improve every day; hopefully, they can take confidence from the efforts today and we can win [the] two games coming up.”

Despite the defeat on Thursday, there were positives to take from the performance. Finger spinner Andy McBrine clinched his 50th ODI wicket and his maiden five-wicket haul for Ireland – picking up career-best bowling figures and Ireland’s sixth-best bowling figures in the 50-over game.

He’ll be hoping to carry the momentum of that performance into the final two matches as he has a key part to play with the ball. On Friday, McBrine said:

“It was obviously pleasing for myself to get my first five-for for Ireland yesterday, but the result puts it more in a wee bit of a downer – it would have been nicer to get five wicket and a win, but it wasn’t to be. I’ve been practising quite hard for the last 3 or 4 weeks out here and lucky enough yesterday was my day with the ball.”

With the bat, the middle-order impressed with an 86-run stand being shared between Curtis Campher (39) and Lorcan Tucker, who made 83.

Tucker’s knock of 83 was his second half-century in for his country and the first since July 2019, when he scored 56 against Zimbabwe in Belfast. He was the anchor of Ireland’s innings as they made a good fist of chasing 288 for victory.

Speaking on Friday, Tucker said that it was a game of fine margins and that small mistakes cost the side, playing a defining part in the result. However, he remains optimistic that the precedent set in the field by previous Ireland sides can be instilled in this group once again in the next match.

“I think we let ourselves down in the field yesterday. We missed several chances, myself included, that could have had a drastic effect on their total and thus, our chase. As a group, we work hard on our fielding, so we hope that yesterday was a one-off and we can return to our high standards on Sunday.”

The second ODI between Afghanistan and Ireland gets underway at 06:00 GMT and can be watched on television or streamed online. For full details, click here.