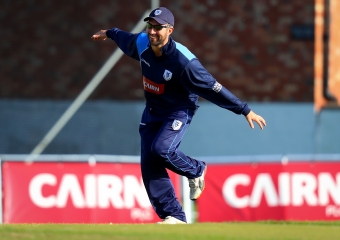 There is little doubt that Tuesday’s opening match of the Test Triangle Inter-Provincial Cup is an Irish domestic blockbuster. Both sides brimming with international players, and complemented by some of the best up-and-coming talent in Ireland, means that this is set to be one of the most eagerly anticipated domestic games in recent years.

After over 100mm of rainfall falling within 24 hours on the weekend, the first 50-over match of the 2019 Cup competition was postponed for 24 hours and will now be played on Tuesday 23 April 2019. The weather may still play a part, but there is expected to be plenty of on-field action.

Defending champions Leinster Lightning know their way around this competition, having won it for the last five years, however they come up against an emboldened North West Warriors side who are hoping to take the confidence of the 2018 Inter-Provincial Championship title victory into the white ball formats.

Lightning’s captain, George Dockrell, had a stellar domestic season in 2018 finishing the highest run-scorer in the 50-over competition (231 runs with a highest score of 98*) and claimed the most wickets in the same competition (10 wickets at 13 runs apiece). With the ball, fans will be keen to see the recently returned Barry McCarthy steaming in for his first Lightning appearance since 2013.

Meanwhile Irish Test and ODI captain William Porterfield, who finished second in the 2018 Cup run-scoring charts (219 runs with a highest score of 110*) for the Warriors, will miss the game serving a one-match ban for a disciplinary infraction in 2018. In the absence of Porterfield, perhaps the two key players for the Warriors are the Rankin brothers – David to provide some batting spine at the top of the order, while Boyd who will be keen to impress both Warriors fans and the international selectors with the England one-day international looming on the horizon.

The Warriors bowling attack will not need reminding that when these two sides faced each other in the last Cup-encounter in September 2018, their pace attack dominated the Lightning’s well-credentialled top order and had the Leinster side 34-5 in the 14th over. It was only some dogged batting by Gareth Delany, who found much needed lower-order support from Dockrell, Lorcan Tucker and Tyrone Kane, that saw the batting side revive their innings and post a total of 253-8, going on to win by 58 runs.

The Lightning lower-order is not one to be underestimated, with the luxury of having the in-form Dockrell batting anywhere from six to eight in the order (his 98* was scored coming in at eight), the Warriors attack will not want to let another opportunity slip if claiming early in-roads. However, the Warriors bowling stocks have been bolstered by the arrival of Boyd Rankin and will feature fellow international Stuart Thompson who impressed with both white and red ball in hand during the recent Afghanistan series in India.