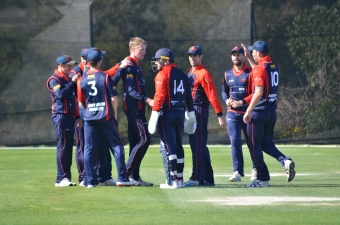 Following the convincing Northern Knights victory over the North West Warriors in the last Test Triangle Inter-Provincial Cup match on Wednesday, the defending champions Leinster Lightning find themselves coming up against a confident and in-form side looking to double-up on their success and finish this La Manga leg of the competition with one-hand already on the Cup.

However, the Knights need no reminding that taking early wickets doesn’t necessarily equate to an easier day in the field when confronting the Lightning. Having the Leinster-side at 62-6 in their first meeting in the Cup last year, the Knights then suffered a world-record seventh wicket unbroken partnership of 215 between Simi Singh (121*) and George Dockrell (98*) which propelled the Lightning to a 53-run win.

In the reverse meeting later in the season, the Knights were once again haunted by their batting nemesis Dockrell who posted 94* to carry his side to a three-wicket win with nine balls to spare.

While it is hard to go past Lightning captain Dockrell as a key player for the Dublin-based side, the match may provide the perfect setting for one of Lightning’s emerging brigade to make a difference - be it the batting of Jack Tector, bowling of Josh Little or impact of Tyrone Kane. Of the more established players, Andy Balbirnie will also be looking to spend some time in the middle before the England ODI and Tri-Series getting underway in May. Balbirnie’s 145* against Afghanistan in March, and his follow-up 82 in the second innings of the Test has given him a platform for a big year at domestic and international levels.

The Knights’ performance against the Warriors on Wednesday saw several players stand up and be counted - most notably the all-round efforts of Harry Tector (36* and 5-36) and Mark Adair (44 and 3-29), and the batting of Marc Ellison (87) and Gary Wilson (40). However, this match may be the ideal platform for recent Test-debutant James McCollum to press his white-ball credentials ahead of the upcoming international ODIs next month. McCollum hit a 42 against the Lightning last season in the Cup, but will be itching to get his domestic season going after falling cheaply against the Warriors. His batting performances back in January against Sri Lanka A, and his battling second-innings 39 in the Test against Afghanistan, gave Irish cricket fans a glimpse of what McCollum will be keen to display regularly during the domestic home season in 2019.

The batting talent, and depth, of the Leinster side may appear to give them the edge on paper, but the last outing by the Knights’ batters means their confidence will be high. This game could well be dominated by the big hitters, particularly if the pitch continues to dry out, and play with consistency and pace. In fact, taking the pace off the ball may be the best way of combatting two batting line-ups full of experienced match-winners and emerging talent hungry to score - and score heavily. So, could we see a batting shoot-out with plenty of scenes of fielders throwing the ball back from the other side of the boundary rope?