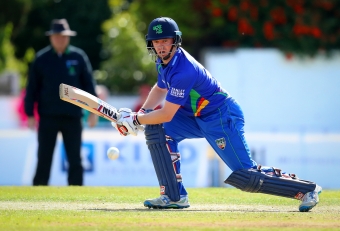 A lot rests on the experienced shoulders of William Porterfield

The North West Warriors will be looking to pick up their first win of the Test Triangle Inter-Provincial Cup and avenge their first round loss to the Northern Knights when the two sides meet on Monday at Stormont. The Warriors were well-beaten by Leinster Lightning last week, but welcome national captain William Porterfield back into the side after he missed the last match recovering from an injury.

The Warriors will be without Boyd Rankin and Stuart Thompson (missing this game through injury), while Skipper Andy McBrine misses the game to attend the funeral of Alan Dunn, who passed away last week. The Knights, on the contrary, will field a strong side with a healthy dose of international talent at their disposal, including Gary Wilson, Mark Adair, James McCollum and James Cameron-Dow to name a few.

When these two sides met in La Manga back in April, the Knights amassed 265-6 from 36 overs in a rain-reduced match, but it wasn’t the internationals that led the charge that day, but open Marc Ellison who hit 87 from 91 balls. That innings, combined with Adair’s 15-ball 44 demonstrated the depth of talent available at the Knights in 2019. The Warriors batting line-up failed to fire in response, and at 78-9 at one stage they looked set to register one of the lowest team totals in the competition’s history. Only a 69-run last wicket stand saved the Warriors blushes.

Worryingly for the Warriors, that side featured the now missing trio of Rankin, Thompson and McBrine, so they will be relying on the experience of Porterfield to lead a young, relatively inexperienced side against an in-form Knights.

The North West Warriors will be looking for William Porterfield to continue his good international form, and his opening partner David Rankin to help give the visitors a solid platform. The 22-year old Aaron Gillespie will look forward to the opportunity to display his talent with the bat, while Craig Young will want to prove a point against a solid Knights batting line-up with the ball. The South African-born Graham Hume will also be looking for more wickets after claiming three Lightning wickets in the Warriors last outing.

For the Knights, there is talent and depth to spare, but look for Harry Tector to shine again after hitting 36* and claiming 5-36 in a stellar performance last time these two sides met. Also looking to make an impression will be Shane Getkate who would be seeking to remind the international selectors of his all-round talent.

The match will likely be more about which sides top-order can provide a solid foundation to build on. The experienced heads of Porterfield and Rankin will be crucial for the Warriors, while the Knights top six could potentially include three current full-internationals, plus Tector and Greg Thompson who has been making big runs at club level of late.

Partnerships will be the key, and it may be more of a grind for batsmen given the variability in scoring rates in the recent international fixtures at the venue, so this battle of the north may be decided by who is the grittiest rather than the prettiest.