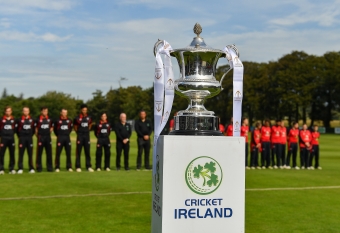 The second round preview

DUBLIN - Quarter-final spots are up for grabs this weekend as the second round of both the Clear Currency Irish Senior Cup and Clear Currency National Cup takes place. Here is a preview of the round and insights from many of the teams involved.

Bob Kerr cup-holders Pembroke will begin their quest to retain the trophy as they take on Dublin rivals YMCA at Sydney Parade. Pembroke will come into the game in confident mood, despite losing to YMCA by 18 runs in a Leinster league game last Sunday, after claiming the Leinster Senior League Cup the previous day, with a 5-wicket victory over Clontarf.

“We’re really looking forward to kicking off our Irish Senior Cup campaign against YMCA on Sunday. It’ll be our first game in the competition since the 2019 final win over Waringstown, in a game we are keen to emulate.

“We have a relatively strong side for Sunday, despite a few injuries, with the likes of Lorcan Tucker, Barry McCarthy and Gavin Hoey all likely to feature. However, we are aware how dangerous a prospect YMCA are, considering the depth in resources they will have available to them, as well as having played good cricket to come out on the right side of a tight league fixture against us last weekend, so we know we will have to be at our best if we are to progress to the next round.”

“The return of the Irish Senior Cup has been met with much excitement and joy from our club with it sadly falling foul for an extended period during Covid. It’s the pinnacle of club cricket in this country and produces a unique level of competition for all those involved.

“After a stern test against a talented bready side in Round 1, we turn our attention to our local rivals Pembroke. Both sides will be bolstered by the return of their Inter-pro cricketers and we’re looking forward to a feisty affair at Claremont Road. We’re also delighted to be able to include Curtis Campher and Harry Tector in our squad after their inclusion in the T20 squad to face India.”

Waringstown, the most successful team in the competition with 6 victories, have featured in the last five Irish Senior Cup finals, winning it twice. They will travel to the capital to face Leinster. The hosts haven’t had the best of time so far this year, with just two wins in the Leinster Senior league cup, however they did have a comfortable victory over Eglinton in the first round of the Irish Senior Cup. They will rely heavily on Bilal Azhar, both for runs and wickets, as they look to make further progression in the competition. However, it would be a major surprise should they upset the visitors.

“We are delighted to welcome to Leinster Cricket Club the most successful team in the history of the Irish Senior Cup. A club whose name is synonymous with the competition. Our squad are looking forward to the challenge posed by Waringstown. The ISC gets the best out of our players and this match will be no different. We almost have a full squad to choose from, with the exception of our former captain Hardus Venter along with Mark Tonge who has exams.” Merrion host Clontarf in what should be a very intriguing clash between two in-form teams.

“The Irish Senior Cup is a huge competition for all clubs and it’s fantastic to see it back this year. Playing against clubs from all over the island is a unique opportunity and challenge that we always look forward to.

“We’re rearing to go for our 2nd round match against Clontarf on Sunday. We have played each other twice already this season so there is a familiarity there between ourselves and themselves. For us, our focus is on executing our skills as a team and bringing our best performance onto the pitch.”

“Merrion have great pedigree in the Irish Senior Cup, so the entire squad and club are looking forward to a close game in Anglesea Road this weekend. We’re lucky to have no injury concerns ahead of the game.”

Two-time winners The Hills will host Cork County, who’s opponents North Kildare withdrew in the first round, at The Vineyard. It will a difficult task for the Munster men, who have just one victory in the Leinster Senior League Cup against North Kildare, when youngster Muzamil Sherzad scored 67. However they were recently skittled for just 48 against the same opponents.

The Hills come into this game after an excellent victory over Phoenix in the Leinster Premier League. Cormac McLoughlin-Gavin scored 134 off 143 balls and was ably assisted by Dylan Blignaut with 66. Levon Shields took 3-39 also. Blignaut himself scored a century in their previous game against Malahide, so their batters are in form.

North Down will travel to Dublin to face Phoenix. Ani Chore, South Africa-born Neil Brand, Alistair Shields and Peter Eakin will bring lots of runs, while among others Tom Mayes is very effective with the ball. Phoenix will be well up for what will be a difficult task. It’s been a roller-coaster season so far, with a solid Leinster League Cup campaign along with an opening win in the T20 competition, but they do go into the game on the back of two losses in the Premier League.

“We are all looking forward to welcoming North Down to the Park on Sunday morning as we enter the Irish Senior Cup fray. We will have an almost full strength Phoenix side on Sunday. Skipper Tyrone Kane will lead the side and will be able to call on the services of his senior players, including Irish internationals George Dockrell and Ben White, along with Danish International Oliver Hald who makes his debut in the competition.

“Olly will be looking to continue his good form with the bat and ball and has fitted in very well into life in Dublin. We also welcome back Nic Pretorius after his appearances for Trinity early in the season, while there will be a cup debut for Tasmanian Will Bennett who has been enjoying all the cultural aspects of the city since he arrived in April.”

Phoenix head Coach Devon James feels his side are in good shape despite the recent losses:

“The boys are working incredibly hard every week and have shown a real never say die attitude along with a great team spirit. Along with the senior players our homegrown talent have all contributed at different times in recent weeks including Adam Chester, Stephen Black, Theo Dempsey and 16 year-old Sam Morris who have all shown glimpses of what they can do. We are aiming to build on the good cricket we have played so far this season and put together a good Irish Senior Cup (ISC) campaign and are looking forward to welcoming North Down this weekend.”

“We’re really looking forward to the clubs return to the Irish Senior Cup. It’s the premier cup competition in the country and we’re looking forward to welcoming North Down to the Park on Sunday. They’re a quality side with lots of experience, but we’re delighted to have home advantage.

“In team news we welcome the return of our players from the IP20. Nic Pretorius returns from Trinity, which is timely as regular keeper Louis McDonough is unavailable, as is Conor Sheil through work commitments.”

In the other games Lisburn will host Donemana, Newbuildings travel to play CIYMS, while Balbriggan will face Instonians

In the Clear Currency National Cup Ballyspallen face a lengthy journey from just outside Limavady in Derry to the Oyster Oval in Tralee to take on County Kerry. Despite this, they’re looking forward to the challenge of taking on the hosts.

“We always look forward to the National Cup, as it’s an opportunity to play teams from different unions and develop new friendships. We’ll be travelling with a very young team, and this will be a great experience for them. As a club we’ve always worked hard on developing our youth and we are now starting to see that hard work rewarded as ten of this team came through our youth setup.

“In previous matches our spin options have proved to be the match winners, and our newest addition to the team, 15 year old Seth Guy will give us another spin option as he comes into the team on the back of an impressive 6 wicket haul.
We have a number of batsman capable of scoring runs but Damith is the shining light of the attack. The team will be going into the game with a positive mindset but win or lose we will certainly enjoy the occasion in scenic Tralee.”

County Kerry’s Richard Rutland is hoping his side can take another Northern scalp this weekend:

“Back in 2012, Muckamore thrashed us by 8 wickets on their way to winning the National Cup that year - so beating them in the first round ten years later was particularly sweet. In fact, that win was our very first win against one of the Northern clubs - so we are very keen to make it two from two when we face Ballyspallen on Sunday.

“The only definite squad change at present: Alam Morshed comes in for Qassim Butt. Alam has been out of the squad for nearly 12 months due to work commitments but was in fine form last weekend in the Munster Div.1 T20 Cup Final, where we beat Cork Harlequins. Alam struck 33 with the bat and picked up 2 wickets and 2 run-outs to earn himself a ‘man of the match’ nomination from live-stream commentator Mike Griffin.

“Ballyspallen are, of course, an unknown quantity to us but we’ll be looking to make the most of ‘home advantage’ at our gorgeous Oyster Oval.” Strabane will host 2019 winners Railway Union at New Strabane Park. The hosts come into the game on the back of an 8-wicket defeat to Brigade last weekend, while Railway Union have been very inconsistent all year. They do come into the game following a good 7-wicket victory over Cork County last week, with Kenny Carroll scoring 84 not out and Hashir Sultan 51, while Hazma Maan took 4-36 with the ball.

“It’s going to be a massive test against Railway, as we know the calibre of players that they have in their team can produce match winning performances. We’re no stranger to Railway Union as we’ve come up against them a few time in the past, and it’s definitely one we are looking forward to.

“As a squad we’re a fairly confident group and on our day we can put in big performances. We know it’s going to be a challenge but one we are very much looking forward to. We’ve have had a tough start to the year with some of our key players out injured but everyone is getting ready to get us back to full strength, so that is a great bonus for us.

“It’s just great to have the full Irish competitions back this year and it’s definitely something as players you want to compete in. It’s not often you get to play teams from other unions and being able to travel and play in different areas so in that aspect it’s great that the competition has returned to close to normal.”

Cregagh will also face a long trip to Limerick as they take on the hosts in Adare, a game the hosts are looking forward to.

“No matter how much cricket you have played you are always learning. I’m looking forward to the new challenge that playing in the National Cup against Cregagh will bring.”


Clear Currency National Cup – Second Round Draw - games to be played on the 19 June 2022.

Keep an eye on all the latest scores here: bit.ly/CCISCscores