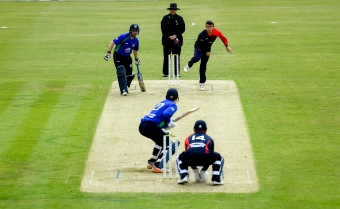 The action starts tomorrow - all matches will be livestreamed

Anyone who saw the recent Ireland Men’s One Day International (ODI) victory over England as a ‘consolation’ win in a 2-1 series defeat possibly exposed their misunderstanding of the new World Cup Super League and the context in which the 50-over format is now played.

To leave that tour against the world champions with 10 out of a possible 30 points was a timely boost for Irish cricket and a young playing group led by new skipper, Andrew Balbirnie.

Pandemic uncertainty notwithstanding, Ireland Men will play a further seven three-match ODI series over the next three years where every single point will matter, where a win here or there could mean automatic qualification for the 2023 World Cup or a further qualifier series.

For the Irish players involved in the victory over England, and those who are vying for international consideration, attentions now shift firmly towards the upcoming Test Triangle Inter-Provincial Series starting tomorrow.
In the absence of any international cricket in Ireland, the status of the Inter-Provincial Series takes on even greater significance. The first stage of the truncated season is the T20 Inter-Provincial Trophy – a competition that features four teams: Leinster Lightning, North West Warriors, Northern Knights and the Munster Reds.

The second stage, starting on 15 September, will be a 50-over Inter-Provincial Cup competition involving the Lightning, Warriors and Knights.

Given the growing interest in Irish cricket and building on advances in making the domestic game more accessible, all matches in the two competitions will be livestreamed and a new live-scoring match centre will provide scores, statistics, highlight clips and much more.

If talent on the field is the measure, then arguably this is set to be the strongest Inter-Provincial season for many years, if not ever. With the majority of top Irish stars involved, and a significant stock of young talent that have blossomed in recent years, it makes for an exciting series ahead.

Here we look at how the various squads are shaping up.

The Knights, who begin the defence of their T20 crown against the Warriors at Bready on Thursday, will be full of confidence. Powerhouse batter Paul Stirling – who proved he’s one of the most destructive batsmen in world cricket against England – has joined their ranks, however, his appearances will be limited given his overseas player contract with Northamptonshire in the Vitality Blast.

Captain Gary Wilson, James McCollum and 20-year-old Harry Tector will aim to be the mainstays of the batting. Tector’s 29* in that ODI against England evidenced his ability to perform under pressure, and he’ll be looking to pile on the runs in the coming weeks.

All-rounders Ruhan Pretorious, Shane Getkate and Mark Adair give the Knights plenty of depth. After undergoing ankle surgery in January and missing the first two games against England, Adair will be particularly keen to prove his fitness in order to demonstrate his undoubted talent.

William Porterfield and Boyd Rankin are two players who’ll be determined to show what they have to offer in a North West squad that isn’t short of talent.

Porterfield looks set to be joined at the top of the order by Rush CC’s Nathan McGuire, while captain Andy McBrine and seam bowling all-rounder Stuart Thompson will add ballast to the middle order. Undoubtedly one of the most dynamic cricketers in Ireland, Thompson will be keen to perform on all fronts after a period in-and-out of the national side after breaking his collarbone in practice prior to the England ODI in Malahide in 2019.

Ross Allen and David Rankin look set to battle it out for final playing spot with Will Smale taking the gloves. The Welsh-born wicketkeeper batsman who debuted for the Warriors last year spent part of the winter at Sydney Cricket Club and will be looking to evidence the progress he has made.

Joining a formidable seam bowling attack alongside Rankin and Young is Graham Hume - Hume’s 300+ first class wickets and batting add a significant string to the Warrior’s bow. Variety may come from left-arm seamer Graham Kennedy, although he has missed recent games for Ballyspallen with a reported finger injury.

If the Warriors can get off to good starts with both bat and ball, they’ll be very hard to beat.

The Northern Knights may be defending T20 champions, but it’d be difficult to argue against Leinster as favourites for the competition. Battle-hardened and brimming with talent, eight of their squad featured in the Irish XI who beat England recently.

Lightning’s ranks are bolstered by the addition of 21-year-old prodigy Curtis Campher and the big-hitting Matt Ford in the T20 format. Ageas Bowl-hero Andrew Balbirnie and finisher Kevin O’Brien need no introduction, while Simi Singh is a very reliable middle-order batsman and off-spin bowler. Add wicketkeeper batsman Lorcan Tucker to that and there’s plenty of run-making potential.

Gareth Delany is Vitality Blast-bound, but will be available to play in the first match of the T20 series.

The pace bowling stocks are exciting. Josh Little had plenty of bark and bite against England. Peter Chase was also part of the squad, and the 26-year-old seamer will be looking to remind all comers of his talents. Pacer Rory Anders, who took 4-20 in the first Northern XII v Southern XII fixture, will be equally eager to impress.

For captain George Dockrell the T20 series is a great opportunity for him and his players to express themselves.

While the Munster Reds’ squad is bolstered by players seconded from other provinces, Head Coach Ted Williamson sees no problems blending the local and imported talent into a competitive unit once more.
Munster-based opening batsman Matthew Brewster and bowlers Diarmuid Carey and Aaron Cawley, show that there is plenty of local talent representing the Reds this season, and they will be complemented by talented ‘out of area’ players such as captain Jack Tector, who looks likely to partner Stephen Doheny at the top of the order - a partnership that will be crucial to Munster’s success.

Doheny, who turns 22 on Thursday, will be looking to build on a strong winter where his two half centuries against Namibia at the top of the order led to his inclusion in Ireland’s squad to face Afghanistan in India in March. Boasting a T20 average of 40.66 at a strike rate of 133%, Doheny has been outspoken about his desire to build on early success in career.

The batting will be bolstered by Jeremy Lawlor, a Welsh-born batting all-rounder whose seam bowling will not be unsuited to Irish conditions. Lawlor will be very eager to make an impact after losing his Glamorgan contract last year.

Keep an eye out for Jonathan Garth, the 19-year-old leg spinner who was part of the recent touring party to England. While still young, particularly for a wrist spinner, the tournament will be a great opportunity for him to further establish his credentials.

Rory Knox is a contributor for Emerging Cricket, a volunteer-led platform created on the premise that cricket should be a truly global sport from grassroots to global events. For stories dedicated to promoting cricket outside of its traditional centres check out emergingcricket.com.