May 26th 2022 by Gerard Mulreaney | International 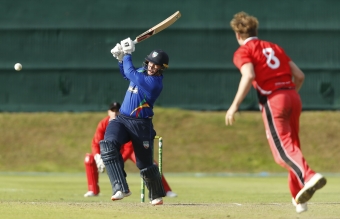 COMBER – The 2022 Inter-Provincial (T20) Trophy competition gets underway this weekend with six games down for decision over three days in a festival of cricket at North Down Cricket Club. Further festivals will take place in Bready and Pembroke in June and July.

Reigning champions North West Warriors will look to try and hold on to the trophy they won last year, after thrilling victories over both Munster Reds and Leinster Lightning during the final T20 festival in Comber.

Warriors star William Porterfield, who was very influential in that final win over the Lightning scoring an unbeaten 39 runs, won’t be available for this weekend’s games as he has coaching commitments in the Vitality Blast T20 with Gloucestershire. Into the side comes youngster Raymond Curry following some excellent performances of late for Bond’s Glen.

Leinster Lightning bowler Josh Little, while named in their squad, will only play in one of the three matches following precautionary medical advice. Captain George Dockrell and Harry Tector have been in fine form with the bat so far this season and they hope that continues, while they’ve once again named Munster Reds loanee Mikey O’Reilly in their squad. Northern Knights big-hitter Paul Stirling has Vitality Blast commitments too, as he is due to line out for the Warwickshire Bears. Their wicket-keeper Neil Rock will also be used sparingly, as he’s slowly returning from a calf injury. 19 year-old South-African seam bowler Tom Mayes, who holds an Irish passport, has also been included in Simon Johnston’s squad. The Knights will also look again to Ben White for vital wickets after he finished top wicket-taker in last year’s competition with 17 wickets.

Despite finishing bottom of the Inter-Provincial T20 table in 2021, Munster Reds are in top form in the 50-over format this year, leading the points table. Matt Ford was the leading run-scorer (220 runs) in the 2021 version of this T20 festival, who they relied on heavily, but this year the Reds will have a greater batting depth to look to that includes internationals Gareth Delany and Curtis Campher. Munster Reds: squad to be announced

Check out the latest Green Ball Podcast where Marie Crowe is joined by Isobel Joyce and Andrew Blair White to discuss the latest matches in the Inter-Provincial 50-over Cup, including Munster Reds thrilling victory over Northern Knights at the Mardyke:

All matches in the 2022 Inter-Provincial T20 Trophy will be livestreamed on www.livestream.com/CricketIrelandLive and live-scored on our Match Centre.

Some fans in a number of Asian countries will be able to watch the Inter-Pros through the Fancode app. The livestream production will once again be provided by HBV Studios.