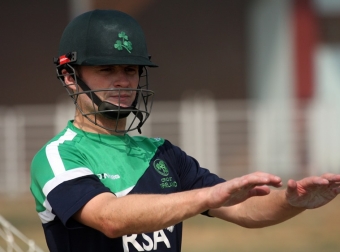 “We can’t afford to be complacent just because we’re the current champions,” says Ireland captain. Ireland captain William Porterfield believes that his side cannot afford be complacent going into the upcoming ICC World Twenty20 Qualifier UAE 2013 (WT20Q) despite being champions of the 2012 tournament.

The ICC WT20Q UAE 2013 runs from 15 to 30 November across six venues in the United Arab Emirates (UAE) and Ireland feature in Group A alongside Namibia, Canada Uganda, USA, Italy, Hong Kong and UAE.

The 29-year-old, who has 30 T20 International matches to his name, admitted that with Namibia in the group, the only team the side lost to in the tournament last year, Ireland can’t rest on their laurels: “I think we can’t look past our group games and our first match against Namibia who we narrowly lost to in the last outing. We know they’re a very dangerous limited-overs side especially in the Twenty20 format so I think they’re going to pose one of the biggest threats in our group.”

The Ireland team will be based in Abu Dhabi for the duration of the tournament, which Porterfield feels his side is prepared for: “We’ve played in Abu Dhabi quite a few times and played on quite a few different pitches. It will obviously depend on what we get when we show up, if there’s more grass on the wicket which might make them slightly quicker pitches or if there is less grass and then it’s slower and lower, so it depends what we come against when we get there.

“We’ve got a great bowling attack with spin in George Dockrell and Paul Stirling and the various seamers, while we’ve got most bases covered in the other aspects of our game. For example, in the top six we’re pretty sorted for batting, and with Kevin O’Brien and Paul Stirling it helps - we can get a lot of overs out of those two allowing for a lot of all-rounders and specialist bowlers lower down the order and it means we have all bases covered.” Having won the Pepsi ICC World Cricket League Championship earlier this year to secure themselves a spot in the ICC Cricket World Cup 2015, as well as going into this event as the current champions, some might think Porterfield and his team may be feeling the pressure to do well in this year’s event, however, it couldn’t be further from the truth for the opening batsman.

“I think it’s something over the last couple of years that has continuously happened when it comes to Associate tournaments, people look to us and the likes of Afghanistan to do well. I don’t think it’s a new pressure for us; we go into these tournaments knowing what we do well and looking after ourselves in terms of what we do. As long as we go in prepared well and with the right frame of mind we’ll be fine,” said Porterfield.

“I couldn’t speak for how other teams feel when they come up against us, but as I’ve said before these lower-ranked teams are pretty unknown to us as well and they’ve shown in the past that they can be dangerous sides too. We’re out to do what we do best but if teams do fear us then hopefully that will be an advantage to ourselves,” he added.

Porterfield admitted that it would be wonderful to have the Ireland men’s side join the women’s team in qualifying for the event in Bangladesh: “Firstly, it’s great to see the Ireland women’s side already qualified for the World Twenty20 in Bangladesh.

“It’s great for the women’s game and great for Irish cricket and fair play to them, it’s going to be great to see them out there. For ourselves, we have to be at the ICC World Twenty20 2014, it’s non-negotiable. It is also important for us to win the qualifying campaign and not have any slip ups on our way to getting to Bangladesh.

“I think a lot of the Associates have got a lot stronger at Twenty20 in the last few years and it’s important for us to keep winning and continually improving as a side.”

Ireland’s squad for this tournament sees them returning with 11 players that were part of the victorious 2012 side, including a number of players who feature in the current England county cricket set-up such as Tim Murtagh (Middlesex), Ed Joyce (Sussex), George Dockrell (Sussex), Paul Stirling (Middlesex) and Kevin O’Brien (Somerset and Surrey).

Porterfield, a Warwickshire player himself, said Ireland players had showed how strong they have become with their recent performances in the county set-up: “Tim Murtagh’s come in and played really well and had a fantastic start to his international career with Ireland, and long may that continue.

“He’s been a seasoned county pro in the UK and churns out wickets and overs year in year out for Middlesex. Gary Wilson has had a great year with Surrey breaking into the first team and holding his position in the side as a batter with Steve Davies retaining the gloves. To play the whole season as a batter is a great effort for him.

“In terms of Twenty20 for us, the two big players for us - it has to be Kevin O’Brien and Paul Stirling, they’re two lads who can play the ropes at will and can score you hundreds off very little balls in this format so they’re going to be two massive players.

“You can go through our side now and there is a high percentage of the side now that has played in county cricket at a very high level and that does help in terms of playing cricket day in day out and being competitive. It helps certainly in performing well as a cricketer.”

One of the stars of Irish cricket, fast bowler Trent Johnston is due to retire from international cricket at the conclusion of this year. Johnston has represented Ireland in 28 Twenty20 Internationals and 67 ODIs, claiming a total of 95 wickets.

Johnston’s departure will be felt by the side and he’s someone Porterfield greatly admires: “The biggest thing Trent brings to the side is that new ball, he never lets you down with that new ball and really sets the tone for any game you play in and makes it easier for the lads around him.

“For the bowlers, I think they’ll miss the knowledge they can pick up from Trent at any time they want to, and to have that experience both on and off the pitch when you’re away on tour -he’s just a knock on the door away and I’m sure he’ll only be a phone call away for any bowlers that need that kind of help or assistance.

“He’s been massive not only for the boys but for anyone coming into the squad, I obviously made my debut under him in 2006 and quite a few of the lads in the current squad would have made their debut under Trent as captain, and he’s going to be a major loss.

“He’s had a major influence on a lot of people’s careers in the team. On a personal note, I’d like to wish him well and hopefully we can send him out on a high with both the ICC World Twenty20 Qualifier 2013 and the Intercontinental Cup final shortly after in December.”

Ireland begin their campaign against Namibia on November 15 at the Zayed Cricket Stadium in Abu Dhabi.