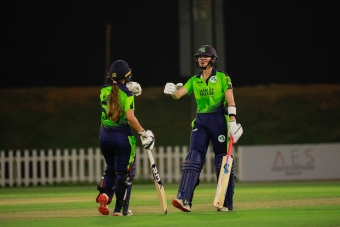 ABU DHABI – Ireland’s Gaby Lewis and Player of the Match Amy Hunter combined for a 91-run partnership as guided their side to a 9-wicket victory over the USA at the Tolerance Oval in Abu Dhabi.

It was a day when the senior players stood up following yesterday’s stinging defeat to Bangladesh. Captain Laura Delany took 1-7 from four overs with the ball - along with a run out and three catches in the field, Eimear Richardson again bowled superbly with 2-19 from four overs and Arlene Kelly 2-17 from her four overs. Lewis’ 44* from 38 balls was a great response after her first-ball duck in the last match, while Hunter struck 43 before being frustratingly bowled with one run to win.

Earlier in the day the USA won the toss and elected to bat first. The Irish bowlers began well, with the recalled Jane Maguire taking the new ball with Richardson again bowling in the powerplay. The early pressure they exerted led to the run out of opener Mehika Kandanala (6).

After a partnership of 44 by Disha Dhingra and Sindhu Sriharsha, it was Cara Murray that created the breakthrough in the tenth over, getting Dhingra to top edge one straight to Delany at backward point - USA were then 57-2.

From there Ireland’s bowling unit tightened the screws further and regular wickets began to fall. Delany removed the dangerous Sriharsha (25), while Rebecca Stokell effected a quick thinking run out of Lisa Ramjit (3).

Richardson then took her 50th T20 international wicket (Isani Vaghela for 14), then followed up with her 51st four balls later. The end came quickly with the last six wickets falling for just nine runs in just over two overs, and the USA were all out for 91.

It was then that Irish openers Lewis and Hunter initiated an aggressive run chase with both batters looking commanding at the crease. However, in the shadow of a possible 10-wicket win, Hunter was bowled.

Lewis didn’t take long to hit the winning run a couple of balls later, and Ireland won by nine wickets with 6.5 overs remaining.

Ireland will face Scotland for a place in the semi-finals on Wednesday at 12pm Irish time.