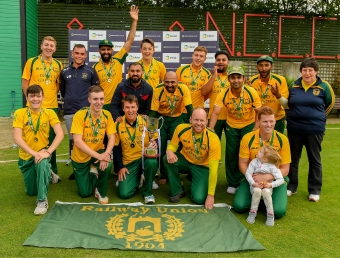 A victorious Railway Union side

Considering the recent rainfall in the region, the North County ground was looking superb, and indeed contributed to setting up a great decider. Railway Union captain Glenn Querl won the toss and elected to bat first.

The Ardmore bowlers took the early honours removing the top three Railway batters for 37 runs, including the prize wicket of Kevin O’Brien who hit a breezy 16 from 13 balls.

The Dublin-based side then stabilised through the middle-order, led by Saad Ullah Khan who hit 38 from 32 balls, which included five boundaries.

Ardmore fought back again and claimed late wickets to then have Railway at 120-8, but the Railway tailenders eked out a further 39 runs for the last two wickets and ensured their side had a target they had a chance of defending.

For Ardmore, Conor Brolly’s 3-31 and Gary Neely’s 3-35 led the way with the ball, ably supported by an excellent fielding performance by the wider team, with several well taken catches particularly Brolly’s smart caught-and-bowled to remove O’Brien.

The run chase started slowly, with Ardmore losing early wickets, and finding themselves at 31-4, which included the crucial losses of the in-form Peet Pienaar and experienced Dekker Curry.

A counter-attacking innings of 40 from 43 balls from Jared Wilson, which included four sixes, got the Ulster-side back in the contest – aided by a steady 31 from Ciaran Curley - but in the end wickets to Hashir Sultan (3-20) and O’Brien (2-29) brought the Ardmore chase to an end on 140.

Sultan was named Player of the Match for his all-round performance.

After-match presentations and then off to celebrate for @railwaycricket. For @Ardmore1879, the whole squad can be proud of the fight they put up. A great final. #NC2019  pic.twitter.com/idl12rVtD0