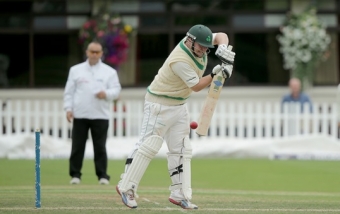 Just 90 minutes play was possible on the second day of Ireland’s InterContinental Cup clash with Scotland at Castle Avenue, as persistent rain forced the umpires to call a halt to proceedings at 5:45pm.

In the 21 overs play which did take place, Ireland advanced their overnight score of 35 for 0 to 99 for 1, just 39 behind the Scotland first innings score of 138 all out.

Ireland skipper William Porterfield was the only Irish casualty, trapped lbw for 30 by the impressive Iain Wardlaw (1-28).

Paul Stirling was in imperious form, striking eight boundaries in an unbeaten fifty from just 73 deliveries - his 20th half-century for Ireland.

Stirling and John Anderson (17*) shared an unbroken stand of exactly 50, before rain drove the players from the field just before mid-day, never to return, despite numerous false starts.

Play on Day Three will start at 10am in an attempt to make up some of the time lost due to the rain over the course of the first two days.

The Scorecard in full can be found here.