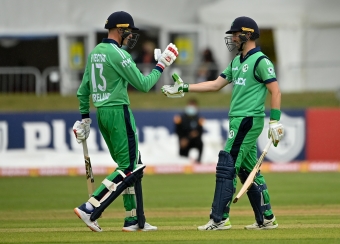 Ireland Men laid a strong platform in the first game of the DafaNews ODI Series against South Africa before rain brought about an early end to the first men’s international match played in Ireland since September 2019.

After a delayed toss, William Porterfield and Paul Stirling made a steady start opening the batting before the former was joined by Andy Balbirnie to put on a record second-wicket partnership. However, shortly after the No.3 joined Porterfield in passing fifty, the rain became too heavy for play to continue, with sustained wet weather only allowing a short resumption before the match was abandoned.

It was the tourists, captained by Temba Bavuma, who won the toss and decided to bowl, with the skies cloudy and DLS a potential factor later in the game. However, Kagiso Rabada and Lungi Ngidi were denied any inroads with the new ball by a diligent opening partnership between Porterfield and Stirling.

While runs proved hard to come by at first, the pair dug in, left the balls bowled in good areas, and slowly put the pressure back on the Proteas. Porterfield played a controlled edge past the slips off Rabada before flicking comfortably through square leg, Stirling crunched a pull off Ngidi past a diving short midwicket, and though the powerplay score only read 28-0, the pair had laid the platform.

Soon after, however, the first wicket fell. Andile Phehlukwayo, whose first over had cost 12, came back to strike with the last ball of his second, Stirling top-edging a pull for David Miller to settle under at extra cover.

Timing, improvisation, and power - this is some shot for six by Mark Adair

That dismissal brought Balbirnie to the crease, and the Ireland captain looked assured instantly. He drove his second ball neatly to the cover fence to bring up the team fifty, and with spin introduced and the opening pair seen off, the run rate began to tick upwards. A steady stream of boundaries helped the hosts along, with fours coming at a rate above one every two overs during their stand.

In the 26th over, Porterfield brought up his half-century, swinging a free hit from Rabada away to the backward square fence. The former Ireland captain last passed 50 in ODIs more than two years ago, but he has been in stellar form in Inter-Provincial cricket, and transferred his domestic form to the international stage.

Porterfield was eventually dismissed in the 31st over by Tabraiz Shamsi, a review revealing he had gloved over the keeper’s head for slip to run around and complete the catch. The second-wicket partnership had added 87 runs, a record for Ireland against South Africa for any wicket in men’s ODIs.

Balbirnie was undeterred, nailing a sweep off Keshav Maharaj in the next over, and tucking a couple off his hips when Ngidi was reintroduced to bring up his 18th fifty-plus score in ODIs. However, three balls after he had brought up the milestone, the rain became too strong for play to continue.

The first delay was a short one, reducing the game to a 43 overs-per-side affair. Ireland showed good intent after the resumption in an action-packed period of play, with wickets lost mattering little.

Balbirnie drilled Shamsi through cover and sliced Phehlukwayo through third man before chipping Rabada to midwicket. Tector smashed Rabada for six and then four before outside-edging the quick to the keeper. But the most eye-catching cameo came courtesy of Mark Adair, promoted in pursuit of a big finish.

The all-rounder deftly struck his second ball for six, arching his back to play a well-timed uppercut off Ngidi which landed directly on the rope. His next big shot, off Rabada, was pure power, a full toss clubbed over long-on and out of the stadium. But one ball later the rain became steadier, and the match was paused again. This time, the delay would be a permanent one.

The second match of the DafaNews ODI Series takes place on Tuesday, 13 July at the same venue.