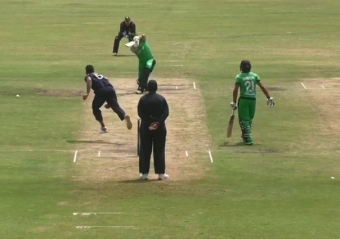 Rain intervened to end play early today, as Ireland XI took on Scotland XI in a 50-over warm-up match in Pretoria, ahead of next month’s ICC Cricket World Cup Qualifiers.

Head Coach Graham Ford chose to rest several players, rotating the squad to ensure all players get game time, and that workloads could be managed ahead of the Tournament proper.

After winning the toss Scottish Captain Kyle Coetzer put Ireland into bat under grey skies. With William Porterfield resting for this match, the Northern Knights’ James Shannon (6 off 16 balls) opened the innings with Niall O’Brien (31 off 56 balls; 4 x fours).

Solid performances by Andrew Balbirnie with 44 off 58 balls (continuing his good run of form after scoring 97 in his last outing against Netherlands) and Simi Singh (35 off 44 balls; 4 x fours, 1 x six), preceded Kevin O’Brien who compiled a well-made 62 off 75 balls (4 x fours, 2 x sixes).

While there was one rain delay, the Scottish side finished their 50 overs with Ireland finishing on 259-8.

Best bowling performance for the Scottish side was the 26-year old right-arm paceman Safyaan Sharif who claimed 3-39 from his 10 overs, which included two maidens.

Set 260 for victory, requiring 5.20 runs per over, the early pressure from Ireland’s bowling unit had Scotland at 28-3 in the 7th over. Paceman Peter Chase took two early wickets, including the prize scalp of danger man Coetzer for a first-ball duck.

Scotland’s opener Matthew Cross (54*) led a recovery taking Scotland to a position of 87-3 before the rain came down in the 19th over, washing out the rest of the day’s play.

Earlier in the day Ireland announced Stuart Thompson (not in the original touring squad) would be included in today’s team for this game as cover and to provide him competitive practice. Thompson has been training with former Ireland Head Coach Adi Birrell in South Africa for the last several weeks.

The next warm-up match for Ireland is against Hong Kong XI on Friday.