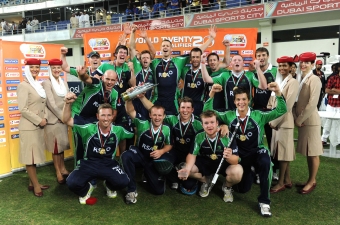 Boyd Rankin is a welcome addition to the Ireland squad which takes on Bangladesh next week at Stormont in the RSA Twenty20 International Series.

The 28 year old hasn’t featured for his country since suffering a stress reaction injury in his right foot following Ireland’s successful ICC World Twenty20 qualification campaign in the UAE.

Rankin, who has taken 109 wickets in his 78 appearances for Ireland is delighted to be back in action: “It’s obviously been a frustrating time sitting on the sidelines but it’s great to be back bowling again. The weather has hampered the amount of cricket I’ve played but I’ve been working hard in practise in the nets. I played for Warwickshire seconds against the MCC Universities, and I bowled seven overs yesterday in the three day game against Northants taking 1 for 11.

“The T20’s come at the right time for me as they are ideal in that they are just four over spells as I continue to build up my fitness and strength. The foot is feeling good - the initial healing period was given as 10-12 weeks, but we gave it a further two and I’m benefitting from that.

“I’m looking forward to the games in Belfast against Bangladesh as we’ve had some fantastic tussles against them in recent years. We played some great cricket in qualifying for Sri Lanka and the new ball partnership with Trent and myself proved pretty effective. This is an important series for Irish cricket and hopefully if selected I’ll play an important part in it.”

Also returning to the squad is Clontarf all-rounder Andrew Poynter whose last appearance also came in the qualifying tournament - indeed the 25 year old hit the winning runs in the five wicket victory against Afghanistan in the final.

The rest of the squad is very much along expected lines containing the 13 players named for the RSA Challenge ODI against Australia last month.

The games against Bangladesh take place at Stormont on July 18, 20 and 21, with the first two games getting under way at 5pm, and the Saturday fixture an hour earlier at 4pm.

Bangladesh will play two warm up games at Comber on Monday July 16. They will face an Ireland XI skippered by Andrew White at 12:30pm, followed at 5pm by a second fixture against a NCU Select XI.

Tickets for the RSA Twenty20 Series have been competitively priced with children just £5, senior citizens £12 and adults £15. Full details can be found Here

The squads in full are as follows: