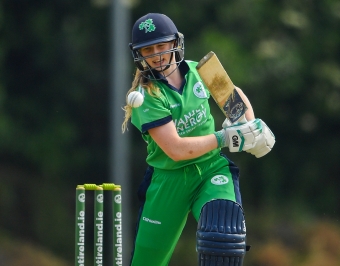 Una Raymond-Hoey will lead the Women's A squad to Scotland

The side, to be led by Irish international Una Raymond-Hoey, features numerous players who have broken through into the senior side in recent seasons, including a number who were part of the recent World T20 Qualifier squad that successfully qualified for the ICC Women’s World T20 in November.

“We are hoping that this series will become a more regular fixture in the calendar. Fixtures for the Ireland Women’s A team provide that vital bridge between under-age / Academy squads and the senior national squad. It allows coaches and selectors an opportunity to see more players compete at a high level. With the Irish Under-15’s also travelling to Malvern this weekend, there are many developing players who will have the opportunity to work closely with coaches and support staff, thereby giving them more insight and appreciation of what is involved in being an international cricketer.”

“Aaron Hamilton, National Women’s Head Coach and Performance Pathway Manager, will coach the side, with Clontarf Cricket Club’s Kerry Tomlinson nominated as Assistant Coach. We would like to thank Clontarf Cricket Club for agreeing to allow Kerry to support the national set-up and believe her experience will be of great benefit to the squad during the series.”