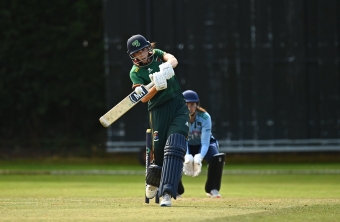 CORK – A masterful century by Rebecca Stokell helped secure the Clear Currency Women’s All-Ireland T20 Cup title for Merrion after a 64-run victory over CSNI at The Mardyke.

Stokell went on to score an unbeaten 110 from just 69 balls, which included 13 fours as they posted a highly competitive total of 169-3 off their 20 overs.

Having lost the toss and been put into bat, Merrion’s international pair of Stokell and Celeste Raack looked very comfortable from the earliest exchanges. While Stokell played the aggressor role, Raack was biding her time, taking singles, and rotating the strike. Stokell quickly moved on to 28, as Merrion reached 43 without loss after the powerplay.

At the mid-way point of the innings Merrion were cruising at 77-0 - Stokell on 46* and Raack on 22*, with the CSNI bowling unit struggling to contain the flow of runs. Stokell brought her 50 up in the 11th over, with a single off Leah Beattie - her half-century coming off 39 balls, including 5 fours.

The opening partnership of 96 was finally broken in the 13th over when Raack (29) was stumped by wicket-keeper Alison Cowan.

Stokell went on to score three straight boundaries in the 15th over off Beattie, scoring 15 off the over as she moved on to 82 not out.

Former Irish international Cecilia Joyce (9) was undone by delicious delivery from Jess Mayes, with the ball coming in off the seam and hitting the stumps, to leave the score 141-2 after 16.2 overs.

A good catch from Aoife Fisher removed Hannah De Burgh White (3), before Stokell registered her century in the 19th over. She went on to finish on 110* to leave CSNI with a mountain to climb if they wanted to claim the trophy.

In their reply, CSNI suffered an early blow on just the second ball of their innings as captain Rachael Thomas chased a short wide ball from Niamh MacNulty and was caught behind by Ally Boucher.

The Northern side were finding runs difficult to come by after that early dismissal and didn’t get their first boundary until the fifth over when Fisher blasted de Burgh White to the cover boundary. After 10 overs they had moved on to 37-1 but they were always well behind the required run-rate. Merrion were bowling tight containing lines, not allowing the CSNI batters get into any sort of rhythm.

Fisher and Cowan did strike up a good partnership of 52, however Raack ended that partnership in thew 13th over by bowling Fisher (18) as she looked to advance up the pitch. Cowan (30) fell shortly after, when she was caught by de Burgh White.

A cameo from Lucie McNaught, hitting five boundaries in a quick-fire 24 pushed the total into three figures, ably supported by Sophie Thomas with 20, but it wasn’t enough as Merrion held them to 105-4, and ran out winners by 64 runs.