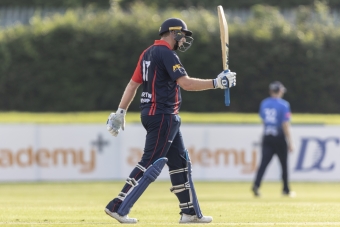 Thompson celebrates a half-century against the Lightning

BELFAST – An unexpected phone call from the national selectors to the back-at-work former international Greg Thompson was a “great way to start the day”, as the Waringstown captain and Northern Knights stalwart was informed he had been selected in the Ireland Men’s T20I squad for the first time in two-and-a-half years.

Thompson, 31, has 23 caps for Ireland, with his last match in March 2017. He had the distinction of being the youngest Irish international when at the age of 16 he made his debut, and after a break from the international arena, his form has forced the national selectors to give Thompson another chance.

“I wouldn’t say I’d written off playing for Ireland again, but the last time I was in the squad I felt that probably hadn’t given it my best in terms of performances. Looking back now, those last caps were against a rising Afghan side featuring Rashid Khan - who has proven himself to be one of the top T20 bowlers in the world - so I’m just delighted to get another chance, and excited to get going and hopefully produce what I know I can.”

“The call from Whitey [Andrew White, Chair of National Men’s Selectors] on Tuesday morning was certainly a great way to start the day. I was back at work after the T20 Festival, and so it was a nice surprise to get.”

“I’m now looking forward to seeing some good crowds at Stormont and Bready - it will be great to potentially play in front of a home crowd with family and friends coming out to watch. I got my first T20 cap at Bready, so there will at least be some familiarity about the surrounds.” Image: Thompson during his innings of 61* from 35 balls last Monday


Asked if he felt he was a different player now than when he last played for Ireland, Thompson said:

“I might have changed my game just a little bit, but probably the biggest thing is that I know my game better and I’m more confident in playing my shots. I’m also, with more experience, knowledgeable that if I have a relatively slow start to an innings I can catch up. That last match on Monday against Leinster Lightning, for instance, I didn’t start that quickly, but I was confident that I would able to catch up and make it count towards the end of the innings. Currently I feel in good nick, so hopefully this selection has come at a good time.”

That innings of Thompson’s, in which he scored 61* from 35 balls against an experienced Lightning attack, cemented in the Selectors minds that the Waringstown captain warranted a recall, with Andrew White subsequently remarking:

“He [Thompson] is in the form of his life at the moment and we believe he has earned his opportunity in the T20I squad through hard work, consistency and the experience he brings to his game. His batting is not just about power hitting, but batting with intelligence. With the T20 World Cup Qualifier on the horizon, we want to ensure no stone is left unturned in finding a side that will give us the best possible chance of being successful, so we wish Greg well with this opportunity.”

Full fixture details here. Tickets are on sale through Ticketmaster now or at the gate.