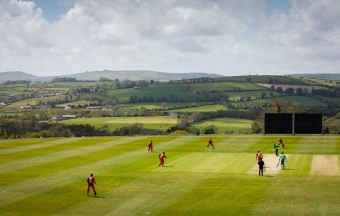 OAK HILL, Wicklow – An unbeaten 74 from 40 balls from Shane Getkate, as part of an 89-run tenth wicket partnership with Peter Chase, has led Ireland Wolves to a convincing 94-run victory over Netherlands A in the first match of the series at Oak Hill Cricket Ground in Wicklow today.

After yesterday’s washout, the rescheduled first match between Ireland Wolves and Netherlands A went ahead beneath glorious blue skies. The Dutch captain Scott Edwards won the toss and opted to bowl first, with Bas de Leede removing both Wolves openers, William Porterfield and Stephen Doheny, with just 25 on the board in the 11th over.

That brought captain Harry Tector and George Dockrell together, and the pair set about building a 92-run partnership. Both players looked confident at the crease, playing through the line and keeping the run rate moving upwards. Then, on 34,  Dockrell forced a cover drive hard and low of Philippe Boissevain that looked off the bat to be heading to the pickets, but Logan van Beek dived one-handed and claimed a spectacular catch just a few centimetres off the turf.

Tector brought up his half-century from 60 balls, as he and Curtis Campher sought to keep the run rate moving, however, on 69 he pulled a short-pitched ball off a top edge to wide long on. Five wickets then fell for 37 runs to change the complexion on the innings completely - Tim Tector came and went for 7, which included a top-edged six that flew over the sightscreen behind him, and Campher was deceived by a slow ball to lob a catch to mid-wicket for 16. Neil Rock literally lost his middle stump on 8, and Graeme McCarter and Craig Young came and went quickly to leave the Wolves at 187-9 in the 42nd over.

With the prospect of being bowled out with plenty of overs to spare, Shane Getkate and Peter Chase decided to hit out. The pair threw caution to the wind and slammed five fours and nine sixes between them as they put on 89 unbeaten runs for the 10th wicket in 50 balls. Getkate was brutal on Bas de Leede in particular, taking 25 runs – including four sixes – off one over. He punished anything short and finished on 74* from just 40 balls.

The support role played by Chase should not be underestimated, his 28* from 30 balls was the perfect foil for Getkate, and was his highest score for a senior Irish representative side. The 89-run stand easily surpassed the previous Wolves record of 59 for the last wicket, and took the Wolves to 276-9 from their 50 overs – a score that seemed unimaginable just eight overs before.

For the Dutch side, Boissevain claimed 3-46 and de Leede and Viv Kingma took two apiece – however, the momentum in the match had dramatically swung the Wolves direction by the innings break.

Looking for a solid start, the Dutch side lost Stephen Myburgh run out for 1 in the first over – courtesy of a Campher direct hit – and then lost two wickets in two balls the next over leaving them at 4-3. Craig Young had continued on his good early season form at domestic level, and delivered a quick opening over, inducing an edge to second slip from Vikram Singh, then trapped de Leede in front the next ball.

Musa Nadeem (16), Scott Edwards (11) and Tony Staal (4) fell in quick order, leaving the visitors 40-6 in the 17th over. There was concern though for the Ireland international Campher who left the field at the end of his third over with a suspected ankle injury which will be assessed overnight.

Tobias Visee played a cameo 42 from 32 balls – his highest List A score, Logan van Beek (59*) and Kingma (26) added late runs, but the tail was eventually wrapped up with Netherlands A finishing on 182, handing the Wolves a deserved 94-run win.

Getkate was named Player of the Match.

The two sides return to the same venue for the second match tomorrow.