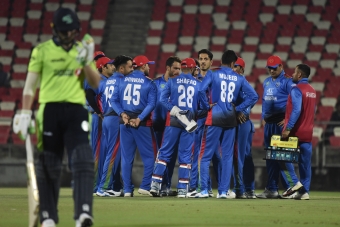 Ireland have posted their 5th highest T20I total, but the innings was in vain

DEHRADUN - Paul Stirling’s highest score in T20 internationals wasn’t enough to deny Afghanistan, who produced a virtuoso display of hitting to win by 84 runs in Dehradun and take an unassailable 2-0 lead in the series.

Stirling struck 91 from 50 balls – Ireland’s highest-ever individual score in T20Is – but the day belonged to Afghan opener Hazratullah Zazai, who struck an incredible 162 not out from 62 balls.

It was the second-highest individual score in T20 internationals, surpassed only by Aaron Finch’s 172 against Zimbabwe last year, and propelled Afghanistan to 278-3, the highest-ever score in the format. Zazai’s 16 sixes was also a new T20I record.

After Asghar Afghan won the toss and elected to bat, Afghanistan’s openers were quickly into their stride, Zazai hitting the third ball of the innings for four – the first of his 27 boundaries – as he and Usman Ghani (73 from 48) took the attack to Ireland’s bowlers.

Their partnership of 236 in 17.3 overs was the highest for any wicket in a T20 international, surpassing Australian pair Finch and D’Arcy Short’s previous record of 223 set against Zimbabwe in 2018.

With the notable exception of Boyd Rankin, who returned the excellent figures of 1-35, Ireland’s bowlers were unable to keep a lid on Afghanistan’s powerful batting line-up who repeatedly peppered the boundary, clearing the ropes 22 times during the innings.

Ghani was happy to play second fiddle to his more aggressive partner but played some sumptuous shots of his own, registering his third fifty in T20 internationals and surpassing his previous highest score of 69. Ireland missed two opportunities to break the partnership through dropped catches – both from the unfortunate Shane Getkate. But it was Zazai’s day with an exceptional performance from the 20-year-old left-hander, playing in just his fifth T20I.

When a wicket finally did come it deservedly fell to Rankin, with Ghani holing out to Josh Little at long-on, but there was no let up as Shafiqullah blasted his very first delivery for six. He didn’t stick around long though, finding Lorcan Tucker at mid-wicket off the bowling of Peter Chase to end his innings on 7 from three deliveries.

Mohammad Nabi wasn’t messing around either, dispatching his first delivery for four and hitting consecutive sixes off Little before the young seamer bamboozled him with a slower ball which rearranged his woodwork.

Faced with a formidable target, Stirling came out all guns blazing, dispatching the first delivery of the innings for six and dominating a superb opening stand of 126 with O’Brien – Ireland’s highest-ever T20I partnership for any wicket.

While the openers remained together Ireland impressively kept pace with the required run rate, however the loss of O’Brien (37), who slapped a Fareed Ahmad full toss to deep cover, and the introduction of champion leg-spinner Rashid Khan signalled a collapse.

Rashid clean-bowled Andrew Balbirnie with a top-spinner from the final delivery of his second over and when Mujeeb Ur Rahman had Stirling caught at deep square-leg from the next ball, nine short of his century, the contest was effectively over.

Rashid turned the screw, removing Tucker and Dockrell in his third over before ending an enterprising innings from Getkate (24 from 16 balls) to finish with figures of 4-25.

Singh (17*) and Stuart Poynter (15*) kept battling until the last but Afghanistan ran out comfortable winners to seal the series, Ireland finishing on 194-6.

Paul Stirling said after the game:

“I think the bowlers have to be able to take a lot from this game. They’ve bowled in tough conditions where the pitch has been good and came across someone who - if they miss any line or length - it goes for six. So I’d be disappointed if the bowling attack didn’t take a lot from today.”

“In the chase, we obviously had to be positive - chasing that score is difficult. We wanted to be there until about the 15th over to really give ourselves a real chance, and then have a go at the last five overs, but we couldn’t quite manage that.”

“Zazai has really improved since we played him at Bready only six months ago, and we’ve certainly seen him whack the ball in two or three competitions since that. His improvement has been vast and we do need to come up with something to try and stop him scoring and preferably get him out early.”

The two sides meet again in the final match of the series on Sunday 24 February.