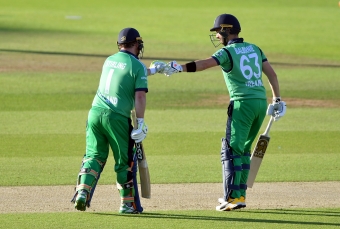 SOUTHAMPTON, England - Centuries from Paul Stirling and Andrew Balbirnie took Ireland to a famous seven-wicket win over England in the third and final ODI at the Ageas Bowl on Tuesday.

The pair put on 214 for the second wicket in a chase of 329 to set up the victory, although both fell in the space of three overs, with 50 needed from 33 balls when Kevin O’Brien walked out to join Harry Tector at the crease. The new pair managed to put any nerves at bay to guide the visitors home to victory, with O’Brien hitting the winning single.

Nevertheless, the stars of the show were Ireland’s captain and vice-captain. Stirling teed up the chase by dominating an opening 50-run partnership with Gareth Delany, contributing 36 of the runs as Ireland were able to build a platform that had been missing in the previous two ODIs.

Then began the monster second-wicket partnership, with Stirling’s massive sixes off the bowling of Adil Rashid making up the majority of the highlights. Balbirnie advanced to his 10th ODI half-century from 43 balls, and Stirling then survived a drop from James Vince at midwicket before moving to his ton from 96 balls.

The milestone-ticking didn’t relent, with Balbirnie bringing up his century from the first ball of the 42nd over, but a mix-up just three balls later resulted in Stirling being run out on 142. Balbirnie’s attempts at acceleration proved costly thereafter as he lofted Rashid to Sam Billings at long-off. England seemed set to wrestle back control at that stage, but the youthful exuberance of Tector married up perfectly with the experience of O’Brien to deliver the win.

Ireland had enjoyed a strong start with the ball at the start of the day after Balbirnie chose to bowl. England’s openers Jason Roy and Jonny Bairstow perished inside the opening four overs, and Vince fell for 16 to leave the hosts 44-3 after 8.1 overs.

Eoin Morgan and Tom Banton then led the English recovery, with the former in blistering mood as he plundered 15 fours and four sixes on his way to 106, with his century reached from just 78 balls. Banton offered a steady presence at the other end, the 21-year-old reaching his maiden international fifty off 41 balls.

But then came an Irish resurgence, with four wickets picked up quick succession. Josh Little kickstarted things with the dismissal of Morgan, with Banton following not long after as Gareth Delany trapped the right-hander on the crease. Curtis Campher’s lively start to his international career continued with the scalp of Moeen Ali, and Billings – in form after two consecutive unbeaten match-winning hands – then found Mark Adair at mid-on off the bowling of Craig Young.

England’s lower order fought back, however, with David Willey using his brawn in a 42-ball 51, while Tom Curran finished unbeaten on 38 as England were bowled out with a ball to spare. Then came Stirling, and thus began the successful chase.