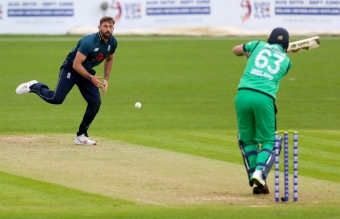 Ireland batted first after a delayed start to the match

Ireland fell narrowly short of securing a magnificent come-from-behind win against England at The Village in Dublin, despite a spectacular fielding effort. There were three brilliant catches and Josh Little claimed 4-45 on debut but it was another debutant who had the final say, wicketkeeper Ben Foakes striking an unbeaten 67 to guide England to victory.

A damp outfield delayed the start to the contest, with conditions eventually improving to allow a 45 over a side game. The undulating contest which transpired was worth the wait.

Batting first, Ireland put up 198 in their 45 overs. They were given a strong start by opening pair William Porterfield and Paul Stirling, who mixed caution and adventure to good effect. After Porterfield played out a maiden to start, surviving an LBW review which returned an ‘Umpire’s Call’ verdict second ball, Stirling struck his first ball – and Jofra Archer’s first delivery in international cricket – sweetly to the fence.

Not long after, Porterfield hit the game’s first six, swinging David Willey over fine leg. Initially it looked like it might have caught a top edge, but it just kept travelling. The pair added 55 and batted through the Powerplay before they were separated when Tom Curran enticed Stirling to swipe to Archer at mid-on, and from that point, the game changed.

Porterfield fell in the next over, tickling Liam Plunkett down the leg side, England’s review successful this time. Two overs later, a delivery after striking his first boundary in ODI cricket, debutant Lorcan Tucker also fell to Plunkett, chipping to Eoin Morgan at cover, and Kevin O’Brien fell six balls later to an excellent catch by Denly at backward point off a thick outside-edge.

Andy Balbirnie and Gary Wilson scrapped to drag Ireland past 100 as England introduced spin for the first time. The latter was tied down and edged an Adil Rashid googly to slip for a 20-ball 8 but Balbirnie looked at ease, smashing a Joe Denly full toss over midwicket for six and striking Adil Rashid for four through the same area not long after. He fell to a piece of alert keeping from Foakes, who collected a leg-side wide as Balbirnie missed a sweep, and removed the bails a few seconds later when the Irishman raised his back foot.

Debutant Mark Adair then played perhaps the day’s most sparkling cameo, slapping Archer through long-on before depositing Curran into the leg-side stands twice in an over, but Archer had the last laugh, delivering a 90 mph yorker to clean up the batsman for his first ODI wicket. Tim Murtagh and George Dockrell regrouped as Ireland sought to bat out their overs, and both fell as soon as they entered the last five, falling to consecutive Plunkett deliveries. The former skied straight up, with Foakes completing the catch, while the latter slapped to Morgan at cover. Boyd Rankin survived the hat-trick ball, and Little was able to smuggle two boundaries before chopping Curran on with Ireland two short of 200.

It seemed some way under par. It ended being just too few, and enough to cause Irish heartbreak.

Murtagh and Adair opened the bowling and kept England quiet for a while, with just one boundary and 16 runs coming in the first five overs. They were helped by an injury to Dawid Malan, which restricted his running between the wickets, but as James Vince stroked a trio of boundaries, it appeared England were stretching away.

When he latched onto a Little short ball, smashing it into the leg side, it seemed destined to bring England four runs closer to their target, only for Dockrell to leap to his left at midwicket and hold onto a blinding chance, igniting Ireland’s fielding effort in the process.

In the following over Murtagh nibbled one into Joe Root’s pads to have him LBW before Little claimed his second, a sharp bouncer getting England captain Morgan in a tangle and brushing the glove on the way through to the keeper.

Malan then fell to Ireland’s second special catch, a thick edge flying to Wilson’s right where the keeper took a one-handed diving grab, marking his 100th ODI cap in style. An over later O’Brien got in on the act, clinging on to a fiercely struck pull from Denly to give Little his third wicket and leave England 66-5.

Willey and Foakes helped to rebuild, playing circumspectly against some disciplined bowling. Willey was marginally the more aggressive of the two, piercing the off-side three times in his 38-ball innings, but was still somewhat tied down, and eventually holed out off Little to Adair on the fine leg fence.

Curran cut his second ball for four to loosen the shackles, but England again took their time before a six and four in the space of three balls from Foakes, after going 57 balls without a boundary since the start of his innings, signalled a change in intent.

Perhaps Ireland’s last chance came and went soon after, when they opted not to review an LBW decision against Foakes, which would have been overturned had they gone upstairs. At that point England were 137-6 and the result was far from decided, but from here on, the English pair scored freely, and eventually eased home with four wickets and 17 balls to spare.

Here is that catch from George Dockrell, in all its glory!

48 hours in Malahide in 48 seconds