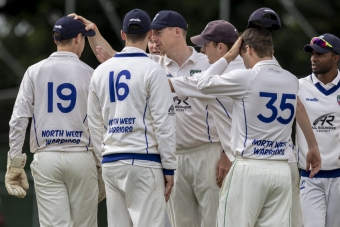 The Warriors celebrate an early wicket on Day Two

DUBLIN - The North West Warriors hold a 37-run lead with one wicket in hand after a day that saw the advantage swing from one side to the other, before - like on Day One - an afternoon shower cut play short.

After limping into Day Two of this Test Triangle Inter-Provincial Championship match on 117-8, the North West Warrior took less than three overs to take the final two scalps and condemned Leinster Lightning to its lowest ever all-out team score in first-class cricket.

By contrast, the visitors from the North West began well and made batting look easy with a well-paced and positive first session. Test captain William Porterfield led the way, and in partnership with Ross Allen the pair registered a 52-run opening stand in just over 11 overs. Porterfield was then joined by Aaron Gillespie who together built a second consecutive half-century partnership - taking the score to 105-1 just after lunch.

Looking in complete control, the Lightning side then found their mojo and a Barry McCarthy led fightback saw the home side claim 6-12 in a 10-over burst. The Warriors had fallen from 105-1 to 119-7 and McCarthy had claimed four wickets through a more disciplined line and length - two LBWs and two wickets caught at first slip were testament to the danger he posed once he found his radar. Image: Craig Young claimed an impressive 4-26 in the first innings

While wickets tumbled, at the other end Porterfield kept his head down and continued to compile runs, sweeping his 90th ball to the boundary for four to bring up another first-class half-century.

Just after the fall of the ninth wicket, with the score on 168, rain started to fall and play was unable to resume for the rest of the day. Porterfield was left to wait overnight on the verge of his 12th first-class century with a patient 95* from 192 balls.

While the Warriors dominated the first session of the day with the bat, the Lightning will be pleased with their comeback, particularly McCarthy - whose 5-51 came from 19 overs - well supported by Simi Singh who bowled with miserly intent claiming 2-36 from 25 overs, featuring an incredible 11 maidens.

After a hard-fought second day, the Warriors head into Day Three tomorrow with a slender 37-run lead with one wicket in hand.