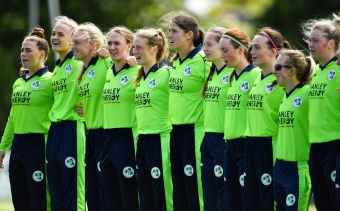 A terrific batting display, led by Eimear Richardson, propelled the Ireland Women’s side to a convincing 79 run win over the Netherlands in the first game of their Quadrangular Tournament. Richardson scored a blistering 63* before contributing 2-7 with the ball to see Ireland to a comfortable victory.

Before play, both Orla Prendergast and Hannah Little were given their first caps on International debut by their club mate, Kim Garth. Having lost the toss and being put into bat, Ireland lost Orla Prendergast early for 9. However, a customary aggressive start from Gaby Lewis had Ireland up at a good run rate and despite her departing for 26 off 16 balls, the start had been positive and had left Ireland 49-2 after the first five overs. The Dutch bowling became tight though and that led to two further quick wickets, which left the Irish side with a bit of rebuilding to do.

This is when Eimear Richardson strode to the crease to join Leah Paul and these two set about rebuilding and pressing on in the innings. Richardson was by and large the aggressor, while Paul played a canny supporting role as the two ticked along at seven and eight an over during the middle period. They brought the score from 63-4 to 140-4, where Paul fell for 26 trying to add late order runs. Mary Waldron came in to be the foil for Richardson, who brought up her fifty off just 36 balls, which was her first T20I fifty for Ireland, and the two pressed hard in the last three overs of the innings.

They did so effectively to finish the Irish innings on 169-5, which seemed like a big score at the halfway stage. Richardson finished on 63* from 41 balls, while Waldron contributed a more than useful 14*.

FIFTY for Eimear Richardson! And what a brilliant innings it has been.

She brings up her fifty off 36 balls with nine 4's.

Ireland Women have moved on to an imposing 157-5 with one over remaining.#backinggreen pic.twitter.com/EuyrbmJ2KN

The target of 170 was always going to be a daunting one for the Netherlands, but Ireland still had to bowl well to ensure it was going to be as hard as possible to get to. A tight first few overs yielded the wicket of Rijke for 3 off Richardson’s first delivery. It was spin that was seemingly doing the trick for Ireland, with Raack getting a wicket in her first over also, trapping Van Arkel infront for 3, to leave the Netherland 29-2.

Their third wicket pair of wicketkeeper, De Leede and captain, Post, dug in and rebuilt the Netherlands innings. However, the bowling was always tight and they could never built up too much momentum at the crease. They brought the score to 73 before the returning Orla Prendergast took her first two international wickets by dismissing the pair of set batters. In the following two overs, a few late wickets confined the Netherlands to 90-7 from their 20 overs. Leaving them 79 runs short of the target.

It was a brilliant all-round display from the Irish side and a perfect way to start this quadrangular tournament with a confidence boosting performance. They are back in action tomorrow against Thailand at 3.30 PM local time, which is around 2.30 PM in Ireland.