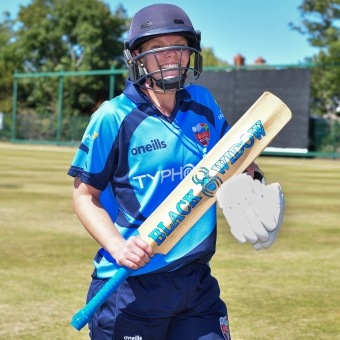 DUBLIN – It was a history-making day in the Arachas Super Series as Robyn Searle broke numerous records to help the Typhoons beat the Dragons and finish second in the table behind the champions Scorchers.

The South-African hit the highest score in Super Series history - scoring 143 not out - beating the previous best of 125 scored by Meg Kendall in 2015. This was the tenth century since the competition began, and the fourth this season.

Having won the toss, Typhoons captain Rebecca Stokell decided to have a bat, a decision that proved to be a masterstroke on a pretty good batting wicket. Openers Celeste Raack and Searle slowly built a solid partnership, scoring just 37 runs in the opening powerplay. They gradually stepped on the gas to put up an excellent first-wicket partnership of 104, with Searle the more aggressive of the two batters.

However, just two balls after Searle reached her 50, Raack (38) found herself trapped lbw by Amy Caulfield. That left the score at 104-1 at the halfway mark of the innings.

Despite taking the wicket of Raack, chances were few and far between for the Dragons. When opportunities did present themselves the Dragons fielding let them down, with Searle dropped twice, on 55 and again on 119.

Sophie Strickland came in at number 3 and spent her time smashing the ball around for fun. She raced to her fifty in just 37 balls, including 8 fours, as herself and Searle put up 152 for the second wicket. Strickland eventually fell to Arlene Kelly in the 44th over, when she left her stumps unguarded while trying to hit big. Strickland’s inning of 73 came off just 60 balls.

Despite losing the wicket of Laura Delany (13) to a run out, the Typhoons went on to score the highest total in this season’s competition with Searle finally finishing alongside Rebecca Stokell (9) on a record-breaking 143 not out.

Chasing over 300 was always going to be a tough ask for the Dragons, and that task became even tougher when they found themselves two wickets down inside three overs, with both Sarah Forbes and Ali Cowan dismissed for ducks.

The Dragons quickly found themselves five wickets down after just 16 overs, with Amy Caulfield (10) Orla Prendergast (18) and Charlotte Lyons (0) all perishing. Caulfield and Prendergast had scored a nice 23-run partnership. Celeste Raack with 3-13 at that stage, two of those with excellent catches off her own bowling.

However, when Cara Murray joined Arlene Kelly in the middle the momentum of the game began to shift as they set about getting their side back into the game. The pair put on 147 runs for the sixth wicket from just over 20 overs.

Kelly got her fifty up in just 40 balls, her second fifty in four days, while Murray proceeded to blast the ball all over Clontarf to score her first career fifty in 53 balls. New Zealand-born Kelly was looking set for a century in the week that she received a full-time playing contract with Ireland but hit straight to Strickland at long off in the 36th over with the Dragons on 200-6.

Unfortunately for the Dragons, and their chances, Murray followed five balls later when she was clean bowled by Georgina Dempsey for a brilliant 75, which included 7 fours and 2 massive sixes.

Despite a spirited fightback, which included a late cameo from Kate McEvoy (45*) and Amy Benson (10) - the Dragons came up 28 runs short.

That completes the Arachas Super 50 Cup for 2022 with the Scorchers crowned champions earlier in the week.