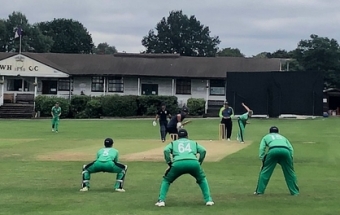 “Hopefully the pre-season weather gods will be kind to us, as two years ago this tour was really beneficial for the Ireland Wolves and helped kick start a number of players seasons on towards further honours. This year the Cricket Ireland Academy will take up the challenge with the tour set to provide an excellent opportunity for our Senior Academy players, emerging players and a couple of senior players returning from injury.”

“We have had some excellent fixtures with Gloucestershire over the years and they will be using this series to prepare their 1st team white-ball players, while England is bringing an emerging player development side. Bath Cricket Club and Rockhampton Cricket Club have been first class venues and hosts in the past, and we look forward to returning for this series of games and playing on excellent surfaces.” Image: Pete Johnston looks ahead to the upcoming tour to England

Speaking about the squad and some new names within the Academy set-up, he said:

“The squad is a young squad – most players are either in their teenage years or early twenties – but has a nice balance to it, with plenty of spin and pace variety along with a good mix of top order batters and all-rounders.”

“Fionn Hand, Ross Allen, Aaron Gillespie and Graham Kennedy are all returning from stints playing club cricket in Australia during the Irish winter, so it will be great to see how they have developed.”

“For fans of Irish cricket they should be excited to see a crop of emerging young players coming through. Since graduating from the Academy, leg-spinner Fiachra Tucker has continued to impress in domestic cricket for Pembroke and was recently invited to a number of Academy Spin training weekends with Albert Van De Merwe, he is a talented dynamic cricketer who can offer with the bat, ball and in the field.”

“Pace bowler Jarred Barnes has been selected off the back of his impressive start in first-class cricket for Leinster Lightning and his T20 Festival experience with Munster Reds. He has further impressed throughout the winter and made big strides both physically and technically working closely with lead bowling coach Rob Cassell.”

“Marcus O’Riordan who has previously represented Kent 2nd XI has signed for Muckamore Cricket Club this season and has also taken part in and impressed at training weekends with both the Northern Knights and Academy over the winter - he is a genuine all-rounder who bowls off-spin.”

“I’m obviously delighted to be named captain for the Academy trip to Gloucester. It’s a very exciting young group with a couple of experienced guys as well and the trip provides us with a great opportunity to play against such high-quality opposition in what looks to be a very exciting summer for Irish cricket.”

The Coach and Support Staff for the tour have been named as: Peter Johnston (Head Coach), Ed Joyce (Assistant Coach), Darren Nicol (Physiotherapist).