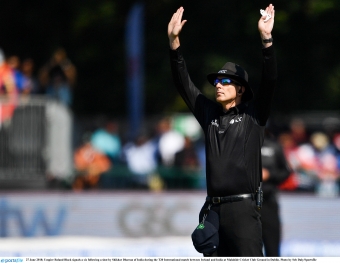 DUBLIN – Irish umpire Roland Black has been appointed to the umpiring panel for next month’s ICC Men’s T20 World Cup Qualifier in the UAE.

The Qualifier tournament begins on 18 October, with the Final on 2 November. Matches will be played in Dubai and Abu Dhabi.

“I feel privileged and fortunate to have been given the opportunity to officiate at the Qualifiers. While I leave for the UAE on the 7 October, there is plenty of preparation ahead of the tournament, including workshops, venue inspections, various meetings and practise matches. These involve working with fellow umpires, match referees and umpire coaches to ensure that everyone will be fully prepared and ready to go when the Qualifiers start.”

“It’s a great experience to be part of a tournament like this. Having the opportunity to work on specific parts of my umpiring routines and techniques over a prolonged period will be beneficial, as is being challenged and tested in various ways in a competitive international match environment. I am hoping that what I learn from the experience I can bring back and share with my Irish colleagues to help improve officiating in Ireland.”

Remarking on this opportunity that has opened up, he said:

“With Cricket Ireland’s inclusion in the Future Tours Programme, it has started to open up new opportunities for Irish umpires on the international panel. If I can give it a plug, there’s never been a better time for people to join the umpiring ranks. It’s demanding and there is a lot of hard work behind-the-scenes that no one sees, but if you have the right attitude, perseverance and work ethic the sky is the limit.”

“Like anything in life, with umpiring you have the good days and the difficult days, but the more you put into your umpiring the more that you get back out. I enjoy the challenges that the game of cricket can throw at you and having the courage and strength when it doesn’t go well to put yourself back out there and to learn from your mistakes. Umpiring gives you the best seat in the house and I have been fortunate enough to meet and work with many very good cricketing people.”

Ireland’s Qualifier fixtures are as follows: