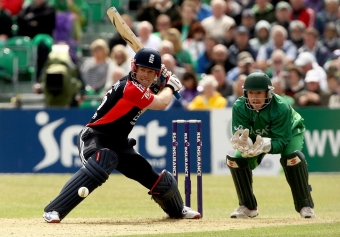 Eoin Morgan will captain England against Ireland on Tuesday

The most significant moments in sport come when a game isn’t so much a game but a defining occasion or moment in time which yields significant ramifications for the long term.

There’s been no shortage of these memorable sporting moments for the Irish public in recent times but arguably none such as potentially defining as Tuesday’s RSA Challenge One-Day International between Ireland and England at Malahide.

It’s been a truly remarkable ten years or so for cricket in this country. The sport has risen to new heights with interest and participation levels reaching levels beyond what has ever been experienced before.

The recent narrow series defeat to Pakistan once again highlighted the progression Phil Simmons’ side have made in a relatively short period of time while qualification for the 2015 World Cup has emphasised their rank as the top associate nation.

However, Tuesday is an opportunity for Irish Cricket to show-off, puff the chest out and send their biggest and clearest message yet to the powers of the game.  It’s an occasion which could shape the future of the increasingly popular game here and a chance to further enhance their quest to rub shoulders with the elite nations on a regular basis.

While extended and regular series against full member nations and eventually Test status remains the proverbial pot of gold at the end of the rainbow, showcase fixtures such as the RSA Challenge against the near neighbours are the perfect opportunity to push a decision from the ICC.

If the players’ ability to perform with the best has soared in recent years then so too have the expectations of the growing cricket loving public. The RSA Challenge will be the biggest cricket match ever to be held on these shores, with the new 10,000 capacity all-seater venue in Malahide being able to host a higher capacity than has ever been seen on the island of Ireland for an international cricket match.

It will be the sixth one-day international between the two countries and if Ireland’s first victory over their near neighbours revitalised and brought new life to the sport on the emerald isle then Tuesday’s much anticipated clash could just be the beginning of a new era for Irish cricket.

After all we can’t afford to simply be content with being top of the associate nation tree, bigger and better things await and the players must continue to show that Ireland belong at the top table of international cricket.

It’s these significant occasions that makes the hairs on the back of your neck stand-up, brings chills to your arms and tears to your eyes. It will be an occasion which the 10,000 in attendance will remember for years to come.

After all, we can’t afford to simply be content with being the top of the associate nation tree, bigger and better things await and the players must continue to show that Ireland belong at the top table of international cricket; Tuesday is the perfect opportunity to do just that.

One of the reason’s for Ireland’s domination of the associate game and ability to compete with the big nations on a consistent basis over the past couple of years has been the settled and dependable nature of the side.

Phil Simmons has had the luxury of being able to select from an experienced and ever-available pool of players to formulate a winning blueprint, with the exception of a couple of injuries here and there.

In fact, the side that take to the field on Tuesday is likely to show just two changes from the one that famously beat England in Bangalore over two years ago. Clontarf all-rounder Alex Cusack misses out through injury while Tim Murtagh will replace the now departed Boyd Rankin.

However, the void left by the 6ft10 fast-bowler has been well and truly filled by Murtagh who is having another impressive season with the ball for Middlesex and will be key for the hosts with his knowledge of the opposition batsman having come up against them on the domestic front. The form, meanwhile, of captain William Porterfield may be of concern to Irish management with the left-handed opening batsman struggling to find his form for Warwickshire but will be able to take heart from a fine half-century against Netherlands back in July.

There will be no such apprehension about the likes of Gary Wilson, Ed Joyce and Niall O’Brien who have all enjoyed productive campaigns with the willow for their respective counties.

Veteran Trent Johnston is in line to make his final appearance in the capital with his retirement date set for the end of the calendar year and will be hoping to write another chapter in the history of the sport in this country on a fitting stage for one of his final cameos in a green jersey.

Much has been made about England’s decision to rest their Ashes heroes for the trip to Dublin with an emphasis on blooding a new set of players in a highly competitive international fixture. Nevertheless, a game in which Ashley Giles and the selectors test out new, hungry players promises to be much more exciting than an encounter during which the likes of Trott, Broad and Pietersen simply go through the motions and treat it like a glorified net session.

Instead, this is a rare opportunity for the fringe players and potentially next generation of international stars to impress on the big stage with plenty riding on the game ahead of the series with Australia.

For all the anger at the perceived snub by the ECB in naming a weakened and untried squad for the biggest cricket match to ever take place on these shores, the visitors are certainly not without plenty of international experience.

Six of those included have donned the Three Lions in the Test arena while Steven Finn, who will be the sole member of the Ashes winning squad involved, is ranked as one of the world’s top fast-bowlers.

Apart from the die-hard and most knowledgeable cricket fans amongst the 10,000 fans packed inside Malahide on Tuesday, not many will have heard or be familiar with the uncapped duo of Gary Ballance and Jamie Overton.

Ballance, a hard-hitting but stylish middle-order batsman has been rewarded for an exceptional season for Yorkshire during which he’s spearheaded the county’s Championship title challenge and scored back-to-back centuries for the England Lions against Australia and Bangladesh a few weeks ago.

The 23-year-old is expected to make his full-debut in Dublin and is certainly one to keep your eye on especially given his recent form and ability to clear the boundary with regularity and ease.

Meanwhile, bowling all-rounder Overton is a hugely promising cricketer and at just 19 is certainly a star of the future. Tall but well-built, the Somerset fast-bowler will add yet more raw pace to a pretty potent looking England attack which should also include Finn and of course Boyd Rankin - all of whom are capable of clocking speeds of 90mph.

Very final tickets for the RSA Challenge between Ireland and England at Malahide on September 3rd and they can be purchased here.