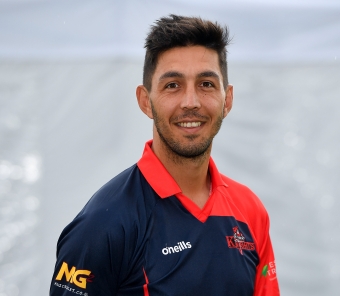 DUBLIN – Northern Knights all-rounder Ruhan Pretorius has joined the Ireland Wolves squad for its tour to Bangladesh, with the squad departing Wednesday morning.

Pretorius will join the squad to replace George Dockrell, and completes the 16-man squad. In a further update, it has been confirmed that Harry Tector will captain the squad across all formats on the tour.

He recently joined Woodvale Cricket Club for the 2021 season after four years at North Down, and has played seven times for the Northern Knights, scoring 96 on his debut in 2019 against North West Warriors.

Speaking from home on the eve of flying out, 29-year old Pretorius said:

“When I received the call from Andrew White it was really exciting – it’s an opportunity I’ve wanted for some time and one I’ve worked towards. The call up is a step in the right direction and I am looking forward to working with the coaches, and hopefully putting in performances that showcase all the hard work I’ve been putting into my game in Ireland.”

“Over the four years I’ve been in Ireland I’ve put in a lot of hard work with my batting, and this last year I’ve really concentrated hard on my bowling with Ryan Eagleson. But I must give a lot if credit to [Northern Knights coach] Simon Johnston who is a mentor for me. We’ve really worked on trying to stick to the basics as much as possible – particularly at various times throughout the season when I may have been struggling with form. Eagy and Jonty have really played a big role in getting me to this point.”

“Growing up in South Africa I always watched cricket, and always knew I wanted to be a cricketer. Believe it or not, I actually used to be a leg-spinner when I was young, but about the age of 13 or 14 I was bowling fast in the nets, and the coaches liked what they saw and encouraged me to bowl fast from then. In terms of cricketing inspirations, I think the likes of Jacques Kallis and Andrew Flintoff were the best all-rounders and I admired greatly – particularly Kallis, who really became the best in the world at the time.”

“I grew up in a place where there were many sports to choose from. Apart from cricket I played rugby until I was 18, and was also in athletics – but by the time I got to the age of 17 I knew I needed to concentrate more on my cricket.” 2020 was a big year for him on and off the field, and he feels he is in good shape heading into the tour:

“Last season started slowly for me – I felt I was in good touch until Covid hit and we went a month or so without training. When we eventually got the season underway I got starts but didn’t go on. But as the season went on I felt better, and ended up top run-scorer in NCU, and made a half-century for the Knights. It was a really disrupted season though at inter-provincial level and we didn’t have the best of season’s as a team, but I’ve been working hard since – doing a fitness programme over winter and indoor training with the Knights.”

“I also got engaged to my fiancée in July, and have been going walking a lot – so I feel in good shape going into this tour.”

“I haven’t played in Asia yet, I’m looking forward to experience those conditions.“

“I just finished a session yesterday with Stuart Barnes, working on skills around death bowling and talking through game plans. It’s been great to work with the national coaches and be able to access their knowledge.”

“The selectors are pleased that Ruhan will be given this opportunity on the Wolves tour. He was unfortunate not to have made the original squad, and was discussed as a strong candidate at the time, but he now has his chance to head to Bangladesh and work with Graham and Stuart for the month in south-east Asian conditions.”

“Ruhan has been an extremely consistent performer since arriving in Ireland, and offers us both a top-order batting option, as well as adding to our seam bowling ranks. Both Ruhan and Graham Hume [also on this tour] qualify for Ireland in April next year, so this is a great opportunity for the pair to test themselves on a higher stage within our system.”

The Ireland Wolves squad is: