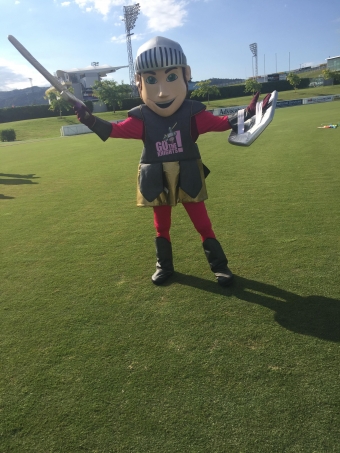 Mark Donegan dressed as a Knight at the Cobham Oval

For Sam Murphy in Whangarei, New Zealand, preparations for the ICC Under 19 World Cup are beginning to loom large. His work on the dairy farm has taken a back seat and the promotional activities have begun. Not to mention the weather that’s getting hotter and hotter as January 14th and Ireland’s first group match approaches;

“This week has been quite the taste of what is to come regarding the weather. It reached highs of 25 degrees and it’s only to get hotter.

Work on the farm had been busy this week. As the weather picked up there were bales to be made and other jobs to be done. I am finished up with work now though, in preparation for the cricket World Cup which has been going really well over the last few weeks.

Mark (Donegan) and myself are currently playing against each other in a two day game in Kamo CC where we lead by 12 runs needing two more wickets to claim first innings victory. I didn’t trouble the scorers too much this week, whereas Mark scored a 50 to put his team off at a great start. Thankfully with a middle order collapse at the end of the day’s play we clawed our way back into the game.

During the week we were helping out at the “Train with the Knights” evening where kids from all over come to train with the Northern Districts First Class Team. There were over 120 kids there along with players like BJ Watling.

I was doing a fielding drill with Scott Kuggeleijn but Mark drew the really short straw! He had to dress up as the team mascot for two hours. It was a fun evening all round made all the better with Mark walking around dressed as a knight and taking photos!

On Sunday we were down at Cobham again to help out the guys umpiring a “Mini’s World Cup “. This was advertising for the Under 19’s World Cup. Grant Elliot was down to talk about his World Cup experiences and he stuck around for some games afterwards.”