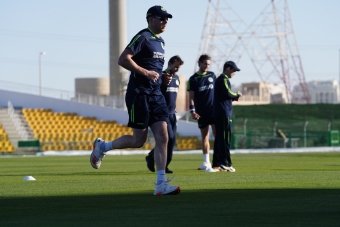 Hopes remain for a second ODI early next week

ABU DHABI – While the Emirates Cricket Board has encouragingly reported there are still no new cases of COVID-19 amongst its playing staff, UAE public health directives will still not permit a resumption of competitive action between UAE and Ireland at this stage. Both the ECB and Cricket Ireland have agreed to suspend Saturday’s scheduled ODI, however hopes remain that a match may still be possible on Monday.

“Emirates Cricket Board confirms that tomorrow’s match in the Sky247.net Abu Dhabi ODI Series 2021 against Ireland has been suspended. Discussions are underway with all parties regarding a final ODI match between the UAE and Ireland being played early in the coming week.”

“Frustratingly, the wait goes on to resume competitive action, however, we fully accept the rationale for the government health directive, and the health and safety of players and support staff will remain Cricket Ireland’s top priority.”

“With the Afghanistan series due to start next Thursday, the players and coaches are keen to get at least another competitive fixture in against the UAE prior to that, so we are hoping that a continued clean bill of health in both camps will allow us to play on Monday. The players will head out for a centre-wicket practice tomorrow.”

“We share the frustrations of fans who were hoping to see a great series with our hosts, but we acknowledge the work of the Emirates Cricket Board in trying to recover what we can of the series given difficult circumstances. We will keep fans updated as circumstances evolve.”