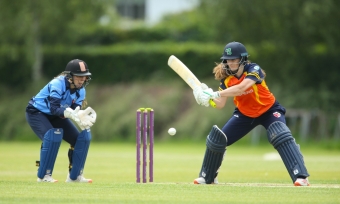 Player of the Match Shauna Kavanagh

DUBLIN – Half-centuries from Gaby Lewis and Player of the Match Shauna Kavanagh led the way for the Scorchers victory today, wrapping up the Arachas Super 50 Cup title 4-1 at Pembroke Cricket Club today.

With Typhoons captain Laura Delany having to withdraw from the match before play, the Scorchers won the toss and opted to bat on what looked a good batting track. Gaby Lewis continued her supreme batting form – following up last week’s 115 with 56 from 54 balls today, which included 10 boundaries. She displayed her skill and all-round shot play, looking indomitable at the crease until she offered a rather subdued caught and bowled chance to Celeste Raack. She finishes the 50-over competition this year with 276 runs at an average of 69.00, and at a strike rate of 91.39. To further demonstrate her batting dominance in this competition, over her five innings Lewis has hit 38 boundaries – the next best batter is Lara Maritz with 15 boundaries.

Lewis and Leah Paul (29) put on 87 for the first wicket in 16 overs, as the Scorchers looked to finish the Cup competition on a high. After both fell in consecutive overs, Lara Maritz (16) and Shauna Kavanagh (53) continued the run-scoring with a 41-run stand for the third wicket.

Kavanagh made her first half-century of the Cup in 2021 from 77 balls, looking solid throughout, using powerful sweep shots to the spinners and playing mainly square of the wicket. Kavanagh’s contribution was more than just the runs she offered, but the partnerships she built with four partnerships of 41, 24, 34 and 22 ensuring the Scorchers middle-order did not lose their way during the often tricky middle overs.

Jenny Sparrow (14), Sophie MacMahon (18) and Cara Murray (19*) added support down the order, and the Scorchers finished on a highly competitive 241-9 from their 50 overs.

For the Typhoons, Raack (2-41) and Ava Canning (2-52) picked up two wickets apiece, however, while she went wicketless today, Orla Prendergast once more bowled beautifully with pace and consistency, finishing with 0-18 from 6 overs.

In response, the Typhoons lost Rachel Delaney run out for a duck and Louise Little (2) caught by a diving catch at cover from Maritz – who has pulled off a number of spectacular catches in the last month.

Prendergast sparkled briefly with the bat for 22, but wickets kept tumbling as the Scorchers bowlers asserted their dominance. Stand-in captain Celeste Raack made an impressive 42 – underscoring her improving all-round game, but the tail did not wag today with the Typhoons losing 5-41 from 13 overs to be dismissed for 136.

While wickets were shared for the Scorchers, Ashlee King impressed with her 3-13 from 5 overs, ably supported by MacMahon (2-18) and Cara Murray (2-31).

The Scorchers have won the 2021 Arachas Super 50 Cup title with a convincing 4-1 win.