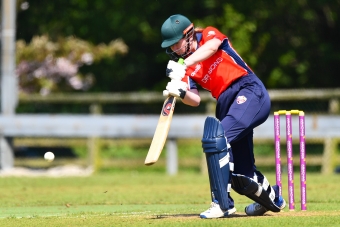 DUBLIN – The Dragons mounted a dramatic fightback in both innings, but ultimately fell short by one wicket against the defending champions, the Scorchers, in the Arachas Super 50 Cup match today at North County Cricket Club.

In the first innings the Scorchers had the Dragons at 91-9 in the first innings before a last wicket partnership of 57 gave the side in Red a breath of hope. Then in the second innings the Scorchers collapsed from 105-4 to 146-9 before inching to victory by a single wicket thanks largely to Shauna Kavanagh’s unbeaten 45. Kavanagh looked the most-assured batter on either side on a pitch that offered much to the bowlers. Her Player of the Match performance will be welcome news for international head coach Ed Joyce as he heads into a busy international season.

For the Dragons, Orla Prendergast was back to her pacy best, bursting through Rachel Delaney’s defences in the first over of the run chase and disrupting the stumps in what has become a customary dismissal for the Irish international. A sharp throw from backward point by Sarah Forbes caught Siúin Woods (14) short, and the Dragons looked buoyed with the Scorchers at 45-2 in the 13th over.

Anna Kerrison (25) and Sophie MacMahon (21) looked comfortable at the crease before both offered catching practice to the Dragons fielders – Kerrison an edge behind, and MacMahon a top-edged sweep shot that flew straight to fine leg. Jenny Sparrow (4) was run out in an unnecessary sharp single, and Prendergast came back on for a second spell with the ball to castle Lara Maritz for 8, and suddenly the Dragons grew in intensity with the Scorchers at 124-6. Earlier in the day, after the Scorchers won the toss and chose to bowl first, an entertaining 57-run last wicket stand between Mollie Devine (27) and Kate McEvoy (23*) rescued the Dragons from a precarious position of 91-9, pushing the total to a more-defendable 148 in 43 overs.

The number 10 and 11 batters played with freedom and confidence, striking three boundaries each and showing their top and middle-order teammates how to approach an innings on this green-tinged wicket. While McEvoy played several fluent off-drives to the boundary, Devine looked busy – capitalising on a few loose balls as the pair built their rear-guard stand.

The Scorchers’ Jane Maguire (3-20) started the early rot in the first over, removing Dragons captain Paul and Amy Hunter in consecutive balls – Paul feathering a catch down legside, and Hunter trapped in front by a ball that swung away from the bat. Prendergast (24) and Sarah Forbes (12) steadied the innings with a counter-attacking 36-run stand, but the pair fell within four balls of each other to leave the Dragons 37-4 in the 11th over.

Kavanagh then pulled off a remarkable run out to dismiss Alan Dalzell (0). After fumbling a wide ball down legside, Kavanagh chased the ball down, ripped off her glove and threw the non-striker’s end stumps down with Dalzell a metre short.

Cara Murray (23) added middle-order runs, before misjudging a run to cover and was run out by a good throw from Maritz, before Maritz was in the wickets herself. Bowling as an uncustomary fifth change bowler, the Balbriggan pace bowler had been extracting inward movement and threatening to dislodge the bails on numerous occasions before she finally got one on target, knocking back Kia McCartney’s off stump.

The 10th wicket stand saved the Dragons blushes, with the Scorchers bowling unit looking increasingly frustrated as the partnership progressed. Eventually Devine mistimed an on-drive, and her top-edged shot was taken by a relieved Maritz at cover.

For the Scorchers, Maguire’s 3-fer was reward for her incisive early swing bowling, but it was Rachel Delaney (2-19) and Maritz (1-19) that looked the most dangerous.

The result sets up a fascinating Arachas Super Series, with the next match between the Dragons and Typhoons in Lisburn next Sunday.

Hear an interview with Player of the Match, Shauna Kavanagh: