Scotland A chase down victory in rain-shortened match 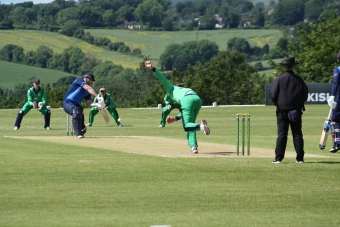 Scotland A claimed the 50-over series

OAK HILL, Wicklow – An unbeaten half-century from Scottish international George Munsey guided Scotland A to a six-wicket victory - claiming a series win against the Ireland Wolves in the 50-over format at Oak Hill Cricket Club today.

Having won the toss and chosen to bat, Ireland had an early setback as James McCollum nicked off in the second over to a good delivery from Gavin Main. This brought, Nathan McGuire to the crease for his Ireland Wolves debut. He started positively and registered a couple of early boundaries, however, was unlucky to drag one back onto his stumps to leave Ireland at 31-2.

Jack Tector didn’t receive much of the strike early on in the innings and was also unfortunate when his hook shot found the hands of Fine Leg in the 11th over. When captain Harry Tector nicked off to Adrian Neill, the home side was left at 59-4. Amongst these wickets, Lorcan Tucker batted very positively and when joined by Shane Getkate, they went about rebuilding the innings. Tucker batted fluently to bring his up fifty off 78 balls.

Getkate looked like he was about to carry on from yesterday’s heroics but he fell bowled to Leask for 20 with one that seemed to skid through. Soon after, the rain came down and brought the players off for an early lunch at 119-5.

When returning, the Wolves only had six overs to press on, with Tucker, Gareth Delany, Fionn Hand and Ross Allen all falling while chasing quick runs. However, Tyrone Kane smashed the last over for 22 runs to bring the Wolves up to 179-7 in their 35 overs. His clean striking a feature of his brilliant 45* from just 27 balls.

FIFTY for @lorcan_tucker. A great innings from the @pembrokecricket man who reaches his milestone off 78 balls with five 4's and one 6.

The run chase didn’t start very well for the Scottish side with Chris McBride and Oli Hairs both falling to Peter Chase, who delivered a fiery opening spell. McBride was well held by Shane Getkate, while Hairs nicked behind. Craig Wallace and Dylan Budge batted with great intent despite the early two wickets, especially Wallace, who looked in particularly good touch.

Just when the game looked like it was getting away from the Wolves, Harry Tector struck to remove Budge, caught at deep mid-wicket by his brother, Jack. Combined with the wicket of Wallace who edged behind off Kane for 48, Scotland were 100-4 and there was a window of opportunity for the Irish side. A mix-up and subsequent run out of Michael Leask had Scotland 123-5.

However, the Wolves could never dislodge George Munsey, who showed all his class and ability in his unbeaten 52 to guide his side home, with able assistance from both Finlay Macreath and Chris Greaves. They ended up coming out on top by four wickets with six overs to spare in the chase.