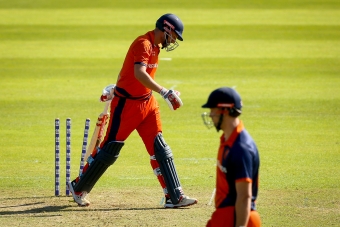 The Scots cruised to victory today, setting up a tense decider tomorrow

DUBLIN – A disciplined bowling performance led Scotland to a comfortable victory over the Netherlands in the GS Holding T20I Tri-Series at Malahide Cricket Club today – setting up tomorrow’s final match as effectively a Grand Final decider against Ireland.

Dutch captain Pietar Sielaar won the toss and elected to bat first. Despite a sprightly opening stand of 30 from 18 balls by Tobias Visee and Max O’Dowd, Netherlands lost 5-26 from the next four overs and well and truly on the back foot.

Debutant Vikram Singh briefly flared, hitting 15 from 13 balls, and Bas de Leede managed a neat 30 from 36 balls, but the Scottish bowlers were always on top of the encounter and the Dutch side lost their final wicket from the last ball – all out for 123. Off-spinner Hamza Tahir finished with T20I career-best figures of 4-30.

END OF INNINGS: Netherlands finish on 123 (all out) after their 20 overs.

In response, Scotland were confident in the task. Despite losing skipper Kyle Coetzer early for 5, the Scottish batters cruised to victory with more than 6 overs to spare. Richie Berrington hit 27* from 19 balls and opener George Munsey hit 27 from 23 balls, that included two big sixes, as the Scots claimed victory losing just four wickets along the way.

The last match in the GS Holding T20I Tri-Series is between Ireland and Scotland tomorrow at 1.30pm, with free entry to all fans and a livestream broadcast available via Cricket Ireland’s Youtube channel. With Scotland just two points ahead of Ireland on the table, tomorrow’s match becomes a winner-takes-all encounter.