Season of Stars: Largest-ever summer of international cricket is coming 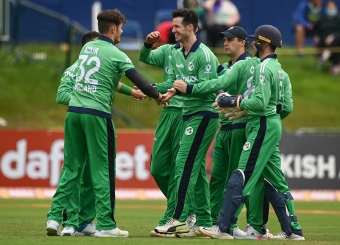 It will be a true Season of Stars this summer

DUBLIN – This summer is set to be the ‘Season of Stars’ - the largest-ever home season of international cricket that Irish fans have seen. Ireland Men’s senior side will take on four Full Members across a 15-match home international season against teams featuring many of the world’s best players.

13 of the matches will be played across the international venues in Ireland, while the men’s series against South Africa will be hosted at The Bristol County Ground in Bristol.

The three-match ODI series between Ireland Men and New Zealand – the world’s top-ranked ODI side - will be part of the ICC World Cup Super League, being a crucial set of fixtures in Ireland’s 2023 World Cup qualification campaign. India men’s visit replicates the two-match series staged in Malahide in 2018 in front of sell-out crowds in the middle of that summer’s heatwave.

The five-match T20I series against Afghanistan is currently being finalised with dates and venues to be announced shortly.

Tickets will go on sale shortly for all venues and will be announced on Cricket Ireland’s website, social media channels and in our eNewsletter (sign up here).

Adding to the ‘Season of Stars’ that will be on show in Ireland, the full fixture list for Ireland Women will shortly be announced – and will represent the largest number of women’s home internationals for the senior squad, against top opposition. This will include an exciting set of fixtures at Bready that will be sure to draw fans from across Ireland. Image: The India Men’s team played at Malahide in 2018

“2022 is set to be the biggest summer of international cricket ever in Ireland, with Irish cricket fans able to enjoy watching some of the world’s best players on show.

“We are delighted to welcome back India Men’s team for the first time since 2018, as well as the number one-ranked ODI side – the Black Caps, who were last here in 2017. Just as important, given we will shortly after be heading to a T20 World Cup, are the two T20I series against South Africa and Afghanistan. Our thanks goes to Gloucestershire Cricket Club for agreeing to host the South African series.

“Tickets will shortly go on sale, as well as the re-launch of our membership programme to give fans even greater ways to engage with and enjoy our great game. We also look forward to also announcing shortly our international women’s programme, which will herald a new era in Irish women’s cricket.

“Arranging and allocating fixtures is always a complicated process given our facility constraints. These challenges require a juggling act around loading on our international pitches, hosting and touring costs, the needs of hosting clubs, reciprocity with opponents, scheduling our elite domestic competitions, profitability of fixtures and taking our men’s and women’s teams around the island. Of course, Covid has also played its part in shifting the sands of the FTP.

“Taking all these into consideration, we decided to postpone both this year’s planned tour to Zimbabwe in April and the home Bangladesh series into 2023. This will help alleviate some of these factors, spread the cost of men’s cricket over two years, and also spread the fixture load across 2022 and 2023, in particular given that the World Cup’s delay to the end of the year has left us to fill the 2023 home season. Even with these changes, we’re still hosting a record amount of men’s cricket against some of the world’s top teams this year – with more exciting announcements to come around our women’s fixtures.

“Just as importantly, with full crowds permitted to return, we look forward to seeing fans flock back to the grounds. Our thanks to our fellow ICC members, the Provincial Unions, host clubs and our event partners for supporting us on putting this programme together – with so many big teams and big names set to feature in Ireland, this will truly be a season full of stars.” Dates and venues for T20I series against Afghanistan will be confirmed shortly.