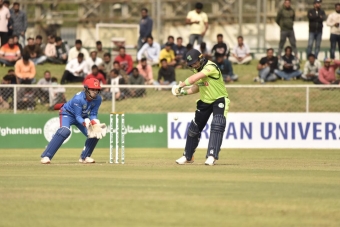 Under blue skies, the Afghanistan captain Asghar Afghan won the toss and chose to bat first. The pitch appeared a lot slower than in the first match, and the Irish bowlers were on top early. While no wicket fell, the first 6 overs of the powerplay period only went for 34 runs. Irish captain Andrew Balbirnie was rotating his bowlers well, while there was excellent support in the field – the plan seemed to not let the Afghan openers to settle.

The first breakthrough came with the score on 57 in the 9th over, with a brilliant diving caught-and-bowled by Gareth Delany, with the dangerous Hazratullah Zazai falling for 28.

When Rahmanullah Gurbaz was run out for 35, the Afghan innings was precariously poised at 76-2 after 12 overs. The Irish bowlers looked to take advantage of the pressure they had built up, but a brilliant counter-attacking partnership of 74 in 30 balls by Asghar Afghan (49) and Mohammad Nabi (27) swung the game the home sides way.

The Irish bowlers struck back with two wickets, but the concession of 24 runs from the last over was decisive, and saw the Afghans post 184-4 from their 20 overs. Image: Paul Stirling and Andrew Balbirnie at the crease

Balbirnie looked the most accomplished and was desperately searching for a partner at the other end to stay with him. Harry Tector obliged and the pair put on 49 in 36 balls, however with the introduction of the world’s number one T20I bowler Rashid Khan, Balbirnie fell to a top edged sweep shot and departed for 46 from 35 balls.

Tector hit out but holed out for 37, and the Irish batters could not maintain the, by then, mountainous run rate required. Eventually Ireland finished on 163-6, losing the match by 21 runs and – consequently – losing the three-match series.

“We started quite well, I thought we held them well – they’re obviously a dangerous side particularly in that power play. But against a side like Afghanistan, you have to be good for 20 overs to get a result.”

“We tend to start [with the bat] quite well in T20 Internationals, but it’s about getting that right balance in the middle to get us over the line in tight games.”

“I think you’re always learning when you are playing such quality bowlers regularly, you’re learning about yourself and how you adapt in certain situations. The series is now gone, so we’ve got to focus on the third T20I – it’s a big T20 year obviously and we’re going to be going in there looking for the win.”

The third match of the T20I series will be on Tuesday 10 March 2020, starting at 8.30am (GMT) at the same venue. For fans in Ireland and the UK, the second match will again be livestreamed.