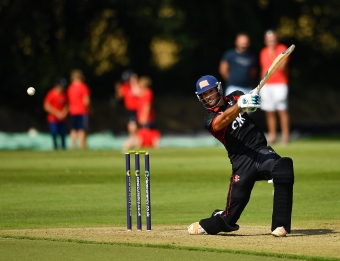 DUBLIN - A brilliant all-round performance by Shaheen Khan, backed up by a wonderful team effort from the Pembroke side, propelled them to their first ever Clear Currency Irish Senior Cup, beating Waringstown by a comprehensive 135 runs.

Khan scored a wonderful hundred, which combined with both Theo Lawson’s 63 and Barry McCarthy’s useful 37 not out in the later overs, got Pembroke up to an extremely competitive 316-7 from their 50 overs. Tight early bowling restricted Waringstown and they bowed to the pressure, ending up 181 all out in their reply, thanks mainly to a four wicket haul from Jack Balbirnie.

Having lost the toss and been sent into bat, Pembroke got off to a solid start, until Jack Balbirnie was adjudged caught behind down the leg side off the bowling of Waringstown professional, Hazeeb Azam. Early batting conditions were tough, but Andrew Balbirnie looked generally fluent at the crease on the way to getting 22. However, he drove loosely off James Mitchell and was caught in the covers. When Phil Eaglestone came on soon after and with his first ball struck to dismiss Fiachra Tucker, Pembroke were in a bit of trouble.

Lorcan Tucker looked in very good touch on his way to 33 at a run a ball, but his dismissal to Eaglestone, who bowled a superb spell from the Pavillion End, left Pembroke 96-4. Shaheen Khan came to join Theo Lawson and the two both batted very sensibly for the situation. Khan was more aggressive, punishing any loose deliveries freely and fluently. Lawson was equally efficient, sweeping well off both spin and seam. The two brought up their fifties in back to back overs, with Khan the slightly quicker in terms of balls.

However, it was the next few overs that was the turning point in the game, with Khan decided to cut loose, hitting boundaries at will. He was on fire for a three over spell, racing from 70 to 100 in no time at all, bringing his hundred up with a hard swept boundary. Despite this, he departed shortly after Lawson had also departed, with their mammoth stand of 148, bringing the side on their way to a very telling total. They got to that big score through the help of both McCarthy and Ryan Hopkins, who both played entertaining cameos as the innings came to a close. They pushed the score up to 316-7 and that was always going to be a very hard chase for the defending Champions.

INNINGS: Pembroke finish on a quite brilliant 316-7 from their 50 overs.

Shaheen Khan the star with 101, Theo Lawson with 62 and Barry McCarthy with a 35* at the close of the innings.

The resumption in play is due to take place at 3.40 PM.#CCISC pic.twitter.com/YQ5R8BZ0I3

Waringstown had to get off to a good start to have any chance of chasing the target. However, Barry McCarthy, who has been in such a ruthless run of form with the ball, had other ideas. He struck twice to clean bowl both James Hall and Kyle McCallan early on, and when Khan struck to dismiss Adam Dennison LBW, Waringstown were 32-3 nearing the end of the powerplay. It left all the responsibility down to Greg Thompson and Lee Nelson, who did counter-attack to good effect for a period of time.

Their partnership was too short lived though, as Josh Little bowled Lee Nelson with a wonderful delivery, and with that, it sparked a mini collapse for Waringstown. 85-3 quickly became 122-8, mainly down to the off break bowling of Jack Balbirnie. Balbirnie has a brilliant ability to mix his pace to great effect, and his undoing of Thompson, who was caught sweeping for 45, was the final nail in the Waringstown coffin. Balbirnie himself finished with 4-52, and was worth every wicket of his spell.

However, the defending Champions refused to ever give in. Gary Kidd, James Mitchell and Phil Eaglestone all chipped in with good later order runs, to give Waringstown a lot of respectability. Mitchell was especially remarkable, clubbing 29 off just 9 deliveries to keep everyone entertained in the late stages of the game. Gary Kidd managed 28 not out as well, to bring the Waringstown score up to 181. However, it was a fitting end as Eaglestone scooped a ball off Shaheen Khan straight into the hands of Pembroke captain, Fiachra Tucker. Sparking wild scenes of celebration from both Pembroke players and supporters alike.

Shaheen Khan was named a most deserved man of the match for his 101 & 3-32 against his former side, rising to the occasion in spectacular fashion. After a 151 year wait for their place in an Irish Senior Cup Final, Pembroke made no mistake in taking home their first ever Bob Kerr Trophy.