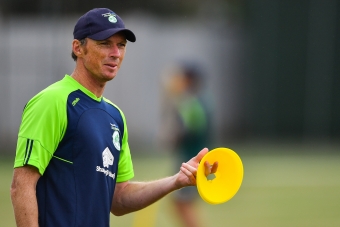 The squad, led by Leinster Lightning’s Jack Tector, features a range of youth and experience – particularly given the nature of the fixture, as explained by Pete Johnston, Academy Manager:

“It was important that we chose a squad that had both youth and experience for the challenge of this four-day game. While it is important that we get experience into some of our most talented emerging young players, this fixture will be an endurance test and we wanted a balanced side that blended players with some decent Inter-Provincial experience with emerging players who we feel are ready for the step up to this level.”

“I’m really pleased with the balance of this side, and for the players involved they will know the springboard it has the potential to provide. The Wolves played Gloucestershire 2nds at the end of last season.  It was in that game that Lorcan Tucker shone with a big hundred, there were also runs for Stephen Doheny, and Tyrone Kane had a good all-round game taking five wickets and scoring runs. All three players progressed well through the winter and have gone on to shine, so this squad will know that finishing the season with a game like this could be a great opportunity to leave the season with a positive message for the Selectors.”

About the inclusion of players in the squad that are not yet qualified for Ireland, Johnston said:

“There are both some faces familiar to Irish domestic cricket fans and some newer faces keen to be more involved in our set up. South African Graham Hume will bolster our fast bowling attack - he is a proven successful first-class cricketer and has impressed in the inter-provincial competition. Graham is very keen to lay down roots in Ireland, which is a welcome sign as it is crucial that we have players of his level to compete and grow the depth of Irish cricket and increase the competition for places.”

“Marc Ellison is another who is nearing qualification and again has shown his potential with the Northern Knights - he is well suited to this format at the top of the order with the bat.”

About there are a number of the new faces in an Academy line up, Johnston said:

“Alistair Frost and Josh Manley may have developed much of their cricket in the southern hemisphere, but both are Irish passport holders and very keen to commit and progress their cricket with Ireland.”

“While Josh has shown his potential with the Knights, Alistair is on the centre of excellence with Loughborough University and earlier in the summer trained with our Academy when we were over there to play England Under-19s, he has scored a lot of runs for his club this season.”

About the fixture, Johnston said:

“We will be looking for the squad to do the basics well and show resilience over long periods of time on what is expected to be a very good, quick pitch at Bristol. Being early in September, we are hopeful of getting plenty of play, and with Gloucestershire 1st’s not being in action this week, we will expect a good contingent of their professional staff to be playing as has been the case in the past.”

“This fixture has even greater importance given the amount of Inter-Provincial multi-day cricket which has been lost this summer due to rain, so the players will be hungry to show their potential in this format with a view to making strides towards the Wolves and our Test side.”