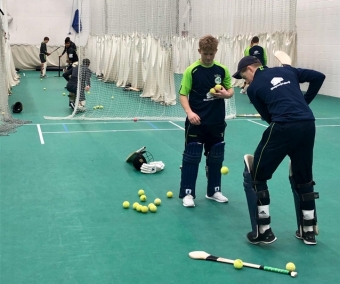 DUBLIN – Cricket Ireland today confirmed 19 players that will form the 2020 intake into the Shapoorji Pallonji Cricket Ireland Men’s Academy, after a bumper year for the Academy during which six graduates received their first international caps.

The Academy, established in 2013, continues to be instrumental in producing Irish cricket talent – both male and female. The programme aims to identify and support the most promising young players in the country and provide them with a bespoke player development programme under the ethos of supporting them to be ‘the best version of themselves in life and cricket’.

Pete Johnston, Cricket Ireland’s Academy and Performance Manager since 2017, is responsible for overseeing the male programme stream, and is pleased that the hard work of the Academy’s players and coaches is starting to bear fruit on the international stage:

“The strength of the Academy comes primarily from the team of experienced coaching and support staff - the Academy programmes are a collective effort to coordinate and deliver across Ireland, with the structure drawing on regional coaches to deliver elements of the programme in regional centres. I’m very fortunate to be able to work closely with former Irish internationals Ryan Eagleson and Albert van der Merwe, and the highly experienced coach Ian McGregor. We’ve also had current Chair of National Men’s Selectors and former international Andrew White working closely with our batters over the years.” “Alongside the cricket coaching, we have had excellent Fitness Testing and Education weekends at the Sport Ireland Institute, and have access to the support of Anne Marie Kennedy (Cricket Ireland Performance Psychologist), David Tobin (Performance Nutritionist) and Sport Scientist Colin Coyle and his team.”


The Academy’s male programme is split into two squads - an Emerging Academy squad and a Senior Academy squad. The average age of Academy participants tends to be around 18 years of age, and the youngest players can start at 15 years of age, however, there is no specific age limit on players benefitting from the ‘finishing school’.

Johnston believes the multi-faceted nature of the programme provides an all-round experience for participants both on and off the field of play: 
“The lads also participate in workshops that look at exploring and designing a high-performance culture which fits the Academy, and the standards the group wish to drive up and be accountable to. That accountability will be greater than ever with the introduction of minimum standards of fitness.”

“We have also introduced in recent years a very successful playing programme which we hope to grow further over time.”

“Of course, the extent of the programmes would not be possible without our primary funding partner, the Shapoorji Pallonji Group – our thanks to the wonderful support they have provided over the years.”

“We’re very pleased with this year’s intake - the most exciting thing is the potential that these young players have to develop to the highest level in a variety of skill sets. With the opportunities and support they will be getting, if they apply themselves wholeheartedly to the programme, they have an excellent chance of converting that potential into strong performances for Ireland in years to come.”

“We also have talented young players like Stephen Doheny, who is performing well as part of our Scholarship Programme with Randwick Petersham Cricket Club in Sydney. He spent a very productive four years as part of our Academy, and now is working with the International Cricket Program (an academy for overseas players playing grade cricket in Sydney).” Image: The Academy squad in a workshop

“There are some new faces in the Emerging Academy who have proven themselves at youth provincial level, and then for Ireland Under-17s - most notably the North West Warriors leg-spinning batter Kyle Magee, left-arm spinner Jamie Forbes, hard-hitting batter Seamus Lynch, and the fast bowling duo of Jamie MacNulty and Theo Dempsey.”

“Nathan McGuire and Mitchell Thompson have earned promotion from the Emerging to the Senior Academy off the back of excellent Under-19s, Wolves and Academy performances with bat and ball in 2019. Will Smale is a new face in the Senior group - the Under-19s wicket keeper-batsman also took part in the International Cricket Program in Sydney and is currently playing with Balmain South Sydney. There is also a recall for the North West Warriors left-arm spinner Ross Allen, who performed exceptionally well for the Academy in 2019 with bat and ball.”

“Lastly, what is very exciting is that by casting the net wider through our National Talent ID weekends under the watchful eye and direction of Talent Pathway Manager Albert Van De Merwe, we have identified and included promising 17-year old fast bowler Zubair Hassan Khan, while fast bowler Conor Olphert is another new addition following training sessions where he has impressed working with Performance Coach Ryan Eagleson.”

“18-year old South African-based left-arm spinner Mike Frost, who has an Irish passport, has also been included in the Academy - he has played provincial and franchise cricket in South Africa at Under-19 level and will be joining Malahide CC this summer. We are delighted that he and his brother Ali are keen to lay down roots back here in Ireland and pursue their future ambitions here.”