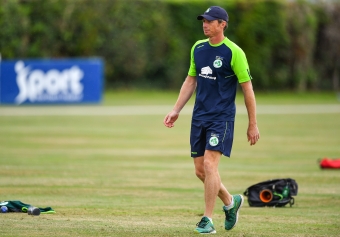 DUBLIN – A 20-player intake for the Shapoorji Pallonji Men’s Cricket Ireland Academy squad has been named as the coaches look forward to returning to action in 2021.

The Shapoorji Pallonji Cricket Ireland Academy was established in 2013 with its chief mission being to produce Irish cricket talent – both male and female – that is ready for international cricket. The programme identifies and supports the most promising young players in the country, and provides them with a tailored player development.

Of the 57 players who have been part of the Men’s Academy over the last four years, 17 have already gone on to be selected for Irish Senior Squads – including James McCollum, Lorcan Tucker, Tyrone Kane, Josh Little, Simi Singh, Harry Tector and Gareth Delany.

“It’s really encouraging to see so many Academy players make it into the senior squad, and I expect some more aren’t far away. The majority of those 17 players have gone onto pick up professional contracts and many are currently making fine starts to their careers, which is a delight to see. I believe that sort of strike rate provides this new Academy cohort additional motivation to develop, and use the opportunity to push their game forward.”

“Academy Performance Coach Ryan Eagleson and I have focussed the Academy programme on providing players with varied learning opportunities, and with the support of Cricket Ireland’s High Performance Director Richard Holdsworth, we are pleased that the National Academy is at the heart of our strategic direction as an organisation.”

“The strength of the Academy is in the coaches we have such as - Ryan Eagleson, Albert van der Merwe, Andrew White, Ian McGregor and through working with our other excellent science and medicine staff we have created an environment that gives the players the support and experiences needed to fulfil their potential as they work on preparing for playing international cricket on the World Stage, while also improving their life skills.”

“The average age of this year’s intake is 18, with players ranging from 17 to 24 years old. A number of these players are currently over in Bangladesh with the Ireland Wolves, which will be an incredible experience. We have been fortunate in recent years to have so many of our Academy players pick up representative experience through provincial cricket, the Academy and the Ireland Wolves. I would expect that all of the group will feature in either the newly revamped Inter-Provincial Series and/or in the new Emerging Inter-Pro competition this season. It’s certainly an exciting time to be a young cricketer in Ireland with opportunities like those to look forward to.”

“You can see by the breakdown of skill sets in this intake that we are covering all bases to help broaden the depth for future Irish international teams. There are eight fast bowlers, eight batters (including two batting-wicketkeepers) and four spinners – three of which are wrist spinners.”

“We have a number of players being involved with the Academy for the first time - CJ van der Walt, Michael O’Reilly, Muzamil Sherzad and David O’Hallorhan. We had a range of opportunities to watch these players in 2020 - through the Regional Inter-Squad games, the North v South fixtures as well as through provincial and club cricket – which collectively helped with our Talent Identification programme.”

“This year, as always, the programme will be a collaborative effort, working alongside the Provincial Unions, our under-age pathway, senior Head Coach Graham Ford, and the Senior Contracted Players who have all been so supportive ”

“Despite not being able to train yet, we have already begun our education programme with the new intake, through online sessions, and all the players are working hard on their strength and conditioning programmes. As soon as we get that green light from government and health authorities, we’ll be in the nets quickly, as we are all itching to get back to skills training.”

The Academy intake will start work once the Sport Expert Groups in ROI and NI give approval.

The women’s Academy intake was announced in December.