Simi Singh on surprise at Caribbean conditions, his “perfect” wicket and T20 tactics 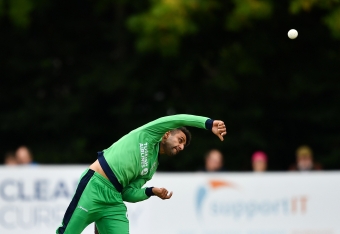 ST. GEORGE’S, Grenada – Simi Singh is in a different place – literally and figuratively. The 32-year old spin bowling all-rounder has gone from seeming like a perennial squad passenger for much of 2019 to one of the first names on the team sheet in the last few games for Ireland.

Singh, who debuted for Ireland in 2017, has been part of various Irish senior squads throughout the last 12 months, but never quite nailed down that spot in the playing 11 consistently. The tide may well have turned for the Leinster Lightning man when he was called up for the final match of the T20 World Cup Qualifier campaign in November against Namibia.

“Definitely that last game in the Qualifier against Namibia gave me a lot of confidence. That was the only game I played in during the tournament, but whenever you get wickets you always carry that confidence into the next game.”

Singh claimed Player of the Match with 3-25 with the ball, as well as an excellent diving catch in the outfield, to ensure Ireland’s third-placed finish at the tournament. He bowled tightly in a high-scoring warm-up match against the CWI President’s XI at the start of this tour (0-35 from 10 overs), and then played a central role in the three ODIs against West Indies claiming six wickets at 20 runs apiece, but even more impressively conceding an average of just 4 runs-per-over against the flamboyant and free-scoring Windies batters.

“I’ve really loved being in the Caribbean, this is my first time and it’s an amazing place. I’ve really enjoyed bowling in these conditions - the ball has been getting a bit of grip and there’s a little bit in it for the spinners, which I didn’t expect at the start of the tour, so that is really pleasing.”

“I was happy with my bowling during the one-dayers, but would have liked to have contributed more runs with the bat.” Tactically, captain Andrew Balbirnie used Singh during the middle overs to stem the run flow and build pressure on the batters during a period of the innings that usually sees the batting side accelerate the run rate.

“The tactics we discussed were quite simple. We looked closely at field settings against different batters – much of the time it was the small little things, like when to have a slip or a short catching cover for instance. It was also about bowling a good line - using your angles and pace, reading the batsman - when they might come down the track or play back - you needed to watch the Windies batsmen carefully.”

“When a plan comes off it is very satisfying. The wicket I enjoyed most was Pooran’s wicket in the second ODI - it was the perfect ball for an off-spinner, pitching leg stump and taking middle-and-off to a leftie. I was really pleased with that. Another wicket I enjoyed was when we moved Stirlo [Paul Stirling] from first slip to short mid-wicket for Romario Shepherd, and within two balls he hit a catch straight to short mid-wicket.”

Ireland’s @SimiSingh147 talks Caribbean surprises, the wicket he enjoyed the most and T20 tactics.

Moving into a different format, how does Singh see the tactics changing for the T20Is?

“The skills don’t change that much, you still have to bowl a good line and length, and you have to protect the boundaries a bit more with field settings. But I haven’t really tried my leg spin in the ODIs - I might look at it during the T20s if I’m playing, as it provides variation that may put the batter off a little bit or may get into their minds a little.”