Simi Singh on his century, looks ahead to T20I series against South Africa 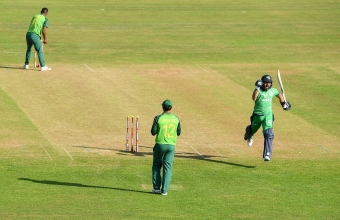 DUBLIN – Fresh of his record-breaking century in the third One Day International last Friday, Ireland’s Simi Singh believes the Irish squad can take much confidence from their 50-over performances into the T20 Internationals starting tomorrow at Malahide.

Singh’s unbeaten maiden century was the highest individual score by a number 8 batter in ODI history, and a moment he is very proud of, despite the disappointment of his side losing that match.

Speaking ahead of training, Singh said:

“To get my first ton against a team like South Africa was a dream come true for me, especially at Malahide where I started my cricket in Ireland.”

“While we were disappointed with the result in the last ODI, overall we were pretty happy with how we played throughout the series - particularly how we fielded. To compete with one of the best teams in the world and take 15 [World Cup Super League] points from the series was a good outcome for us. We’ll take a lot of confidence through from the ODIs.”

“It’s a quick turn-around between the two formats, but most people in the squad are pretty experienced at doing this at this point. We’ve played a lot of T20 cricket over the last few years, so we just need to switch on - as bowlers we just have to back our skills particularly with the death bowling, and the batters need to focus on hitting their areas and finding those boundary options.”

“The mindset as a bowler in T20s is still the same as the ODIs - as bowlers we’re trying to take wickets, as that is the best way to contain their batters.”

“We don’t get to play against teams of this calibre regularly, so this T20I series against South Africa is a massive opportunity for us in preparing for the T20 World Cup.”