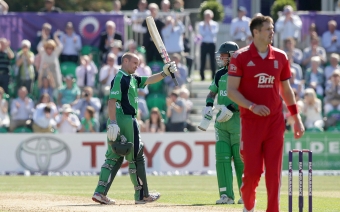 Tickets for Ireland’s clash with fierce rivals England go on sale this morning (9am). The game at Malahide on Friday May 8 2015 will see Ireland renewing their rivalry against their near neighbours in what is set to be one of the most eagerly anticipated sporting events of the year.

The game at Malahide last year attracted an Irish record crowd of 10,000 on a memorable day for the sport. The unique atmosphere was enjoyed by fans from both countries and Cricket Ireland is determined to recreate that magical day once again for supporters.

Ireland coach Phil Simmons has called on Ireland’s supporters, ‘The Blarney Army’ to get behind the ‘Boys in Green’ as Ireland attempt to gain another famous Full Member scalp.

“It’s always a fantastic occasion when Ireland play England in any sport, and last year in my home village of Malahide was extra special. It was a day we’ll never forget and I know just how much the tremendous Irish support meant to all the squad. We didn’t get the result that day, but with the backing of another sell-out crowd, we’ll do our best to give the fans a day to remember.” Cricket Ireland Chief Executive Warren Deutrom looked forward to the game saying: “After last year’s inaugural ODI at Malahide, many people – fans, club members, VIPs, hospitality guests, even senior ICC staff – told us it was one of the best sporting events, let alone cricket matches, they had ever attended.

“We’re determined to top last year’s experience and make this a genuine must-see event for any sports fan. We are sincerely grateful to both Fingal County Council and Malahide Cricket Club members for their terrific support in bringing this event back to ‘The Village’ and we look forward to the community coming out in force once again to recreate last year’s enormous success.” The tickets are competitively priced at €45 for an adult ticket, with senior citizens at €38, while for under 16’s it’s just €15. There are discounts available for clubs and large groups, and further details on these can be found on www.cricketireland.ie

Tickets for the game at Malahide will be sold through the usual channels including the Cricket Ireland website www.cricketireland.ie and Ticketmaster www.ticketmaster.ie.

Here’s a flavour of what to expect at Malahide: